Back to Kit Kat Club[edit]

KIT KAT CLUB. English, Country Dance Tune (6/4 time). G Minor. Standard tuning (fiddle). AABB. Knowles (1995) explains that the Kit Kat Club is where young gentlemen would sit in theaters in the 18th century. The tune was first printed by London publisher John Walsh (with partner P. Randall) in his The New Country Dancing Master, Second Book (London, 1710) and reprinted in his Second Book of the Compleat Country Dancing-Master (1719). John Young, heir to the Playford publishing concerns, printed it in his own The Dancing Master, Second Book (1st Edition, 1710), retaining it in subsequent editions through the fourth and final of 1728.

The Kit Kat Club [1] was an early 18th century literary and social club that met at one of several taverns in London, one of which was run by a publican named Christopher Catling. Catling produced mutton pies that he called 'Kit Kats', and from which the club derived its name. The club had strong literary and political associations (supporting the Whig party), and was famous for its toasts of the reigning beauties of the era. 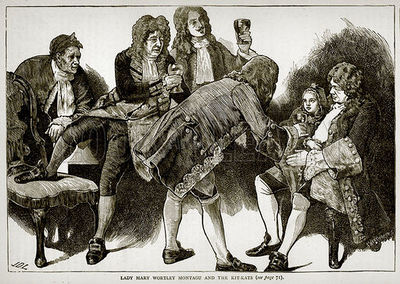 The youngest female to be toasted was Lady Mary Wortley Montagu, daughter of the 5th Earl of Kingston-upon-Hull, aged 8 at the time. Lady Mary matured into one of the most influential letter writers of the century and an important figure in the early history of women’s intellectual history. Dr. Abruthnot seems to derive the name of the club from this custom of toasting ladies after dinner, rather than the renowned maker of mutton-pies:

Whence deathless Kit-Kat took his name,
Few critics can unriddle:
Some say from pastrycook it came,
And some from Cat and Fiddle.
From no trim beaus its name it boasts,
Grey statesmen or green wits,
But from this pell-mell pack of toasts
Of old Cats and young Kits.

The club was famous for its threefold celebrity--political, literary and artistic, where met many of the finest gentlemen and choicest wits of the days of Queen Anne and George I.

Back to Kit Kat Club[edit]