Find traditional instrumental music
This is the stable version, checked on 7 January 2021.
Jump to: navigation, search

Back to Kitty Bo-Bo

KITTY BO-BO. AKA and see "Get Her Bo." English, Sword Dance Tune (3/4 time). England, Northumberland. G Major. Standard tuning (fiddle). AABBCC. A traditional Northumbrian sword dance tune performed by pitmen at Christmas mummer's plays--see note for "Sword Dancer's Song (The)." The title is perhaps from the Gaelic word for cow, bo. The tune originally appeared in Robert Topliff's volume Selection of the most popular melodies of the Tyne and the Wear consisting of 24 original airs peculiar to the counties of Durham and Northumberland [1], published in London c. 1815. It also was entered into the c. 1812 music manuscript collection of Northumbrian musician John Bell [2] (1783-1864). 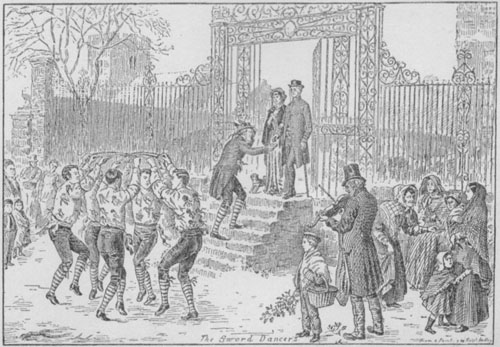 It is still the practice, though less so than formerly, during the Christmas holidays, for the pitmen and other workmen from neighbouring collieries to visit Sunderland, Durham, Newcastle, etc., to perform a sort of play or dance, accompanied by song and music...The dancers are girded with swords and clad in white shirts or tunics, decorated with a profusion of ribands of various colours, gathered from the wardrobes of their mistresses and well-wishers. The captain generally wears a kind of faded uniform with a large cocked-hat and feather, for pre-eminent distinction; and the buffoon, or "Bessy", who acts as treasurer and collects the cash in a tobacco-box, wears a hairy cap, with a fox's brush dependent...The party assemble promiscuously, and the captain forms a circle with his sword, round which he walks and sings, each actor following as he is called on...A general dance concludes the performance, to the old and favourite tune of "Kitty, Kitty, bo, bo!".

Back to Kitty Bo-Bo