Find traditional instrumental music
This is the stable version, checked on 9 June 2020.
Jump to: navigation, search

Back to Kitty Fisher

KITTY FISHER. English, Country Dance Tune (2/4 time). G Major. Standard tuning (fiddle). AABB. Kidson (1890) identifies this air, from Thompson & Son's Twenty-Four Country Dances for 1760, as named for a "notorious" lady who died in 1771. The tune also appears in Thompson's Compleat Collection of 200 Favourtie Country Dances, vol. 2 (1765, p. 29), David Rutherford's Compleat Collection of 200 Country Dances, vol. 2, (c. 1760), and a few musicians' manuscript copybooks, such as that of Thomas Hammersley (England, c. 1790) and Daniel Aborn/William F. Magee (America, c. 1790). Catherine Maria ('Kitty') Fisher [1] actually died in 1767 and was one of the most renowned courtesans in London. She was an accomplished horsewoman and was known for her bravery and wit. Giacomo Casanova visited London in the 1760's and met Fisher, and wrote: 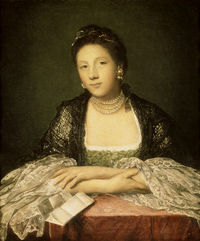 ...the illustrious Kitty Fisher, who was just beginning to be fashionable. She was magnificently dressed, and it is no exaggeration to say that she had on diamonds worth five hundred thousand francs. Goudar told me that if I liked I might have her then and there for ten guineas. I did not care to do so, however, for, though charming, she could only speak English, and I liked to have all my senses, including that of hearing, gratified. When she had gone, Mrs. Wells told us that Kitty had eaten a bank-note for a thousand guineas, on a slice of bread and butter, that very day. The note was a present from Sir Akins, brother of the fair Mrs. Pitt. I do not know whether the bank thanked Kitty for the present she had made it. .... [London and Moscow: The English, Jacques Casanova de Seingalt] 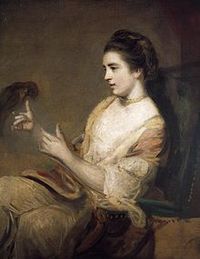 A year before her death she married John Norris son of the M.P. for Rye, and, in the short time before her death she became known for her charity to the locals around Hemsted, her husband's family seat. Her untimely demise was said to have been the result of poisoning by lead-based cosmetics (as was Maria Gunning - see note for "Miss Gunning's Fancy Reel"), although some attribute it to smallpox. Kitty's portrait was painted by a number of accomplished period painters, including Joshua Reynolds ("Kitty Fisher" c. 1763-64), Nathaniel Hone, Philip Mercer and James Northcote. Kitty was also mentioned in the nursery rhyme:

Lucy Locket lost a pocket,
Kitty Fisher found it;
But ne'er a penny was there in't,
Except the binding round it.

See note for "Yankee Doodle" for more on this tune.

Back to Kitty Fisher