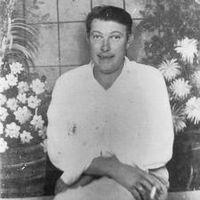 Source for notated version: Iry LeJeune (La.) [Francois]. Accordion player Iry LeJeune recorded less than three dozen tunes, but left a lasting impression on the music of Louisiana. He played in a heavily-syncopated style, often performing at at dances with fiddler J.B. Fuselier. In 1954, when returning home from a dance with other band members, the car they were riding in got a flat tire. As LeJeune and the others changed the tire by the roadside, they were struck by a speeding car driven by a drunk driver. LeJeune was killed instantly.