Back to Lacroix's Waltz Clog[edit]

LACROIX'S WALTZ CLOG. AKA - "Valse-Clog Lacroix," "Valse-Clog de Henri Lacroix." French-Canadian, Waltz (-Clog). D Major. Standard tuning (fiddle). AAB. The waltz-clog was a dance form which had some currency as a novelty around the turn of the 20th century. It is a historical tap step with Irish and German roots. popularized by stage performer Pat Rooney in the late 19th century. The basic step combines a Step, Suffle and Ball Change in a 3/4 time rhythm. 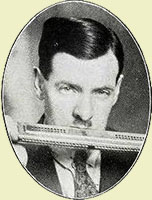 Back to Lacroix's Waltz Clog[edit]