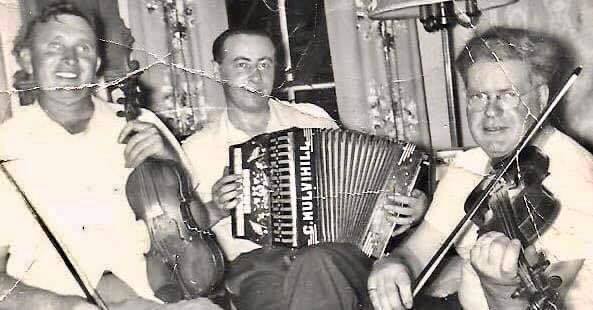 Fiddler James "Lad" O'Beirne (1911–1980) composed this tune in New York, as attested by his son James, and by Longford-born fiddler Paddy Reynolds, who met O'Beirne soon after Reynolds emigrated in 1948. O'Beirne, from the townland of Bellanalack in south County Sligo, had emigrated himself twenty years earlier. Bill Black (1996) relates the story that this reel supposedly was the last tune composed by O'Beirne prior to his death, while Philippe Varlet adds he was told by Lad's son Jim that the fiddler had composed the tune on the subway coming home from work late in his life. The tune became a session staple after it was performed extensively and later recorded in the early 1980's by The Irish Tradition, a trio that included fiddler Brendan Mulvihill and button accordionist Billy McComiskey with guitarist/singer Andy O'Brien

O'Beirne made only one commercial recording, a duet disc with Armagh-born fiddler Louis Quinn, though he did make many acetate discs on a home-made recording machine. Some of these can be heard on The Milestone at the Garden, a compilation CD produced by Philippe Varlet. O'Beirne was younger than Coleman and long outlived him, but the two fiddlers' lives were intertwined musically and personally. They came from the same area of County Sligo (Killavil and Bellanalack are adjoining townlands) and O'Beirne married a niece of Coleman. Philip O'Beirne, Lad's father, was a renowned fiddler who taught the young Coleman before the latter emigrated to the United States. Coleman acknowledged him with "Philip O'Beirne's Delight," a reel he recorded in 1936.

Varlet tells another story he had from Jim O'Beirne. It seems that when Lad was living in New York he was renowned as one of the best Irish fiddlers ever to put bow to strings - even better, said some, than Coleman himself. He was in great demand and played for many occasions. One time he was engaged to play for a wedding with some other musicians, including Hugh Gillespie, a skilled fiddler from Donegal (and incidently, a protégé of Coleman's). O'Beirne arrived and sat next to Gillespie and another, younger fiddle player. Out for mischief, Gillespie leaned to Lad and suggested confidentially that they "play a tune he doesn't know," as if to put the younger player in his place. The remark must have irritated Lad, who decided that two could play that game and resolved to turn the tables on Gillespie. He played a tune he knew Gillespie would not know - followed by another...and another. Gillespie got the message, and after sitting in humiliation for a time without playing a note he packed up his fiddle and bow and left. The day following the gig Gillespie's wife turned up at O'Beirne's door and asked to see Lad, demanding to know what happened at the wedding yesterday. O'Beirne, feigning innocence, asked her what was the matter, and Mrs. Gillespie answered: "I don't know what you did to my husband, but when he got home he threw half our furniture out the window!"

David Taylor (1992) repeated a claim made by Mayo button accordionist Vincent McGrath that this reel was composed by Vincent's uncle John McGrath (1900–1955), an influential fiddler, button accordionist and music teacher in New York. John McGrath was certainly a composer (see "John McGrath's Composition") but Vincent has claimed for him quite a few famous tunes that have been attributed to others, or for which the only evidence of his uncle's composition is the fact that the older McGrath wrote them down in his personal manuscripts.