Find traditional instrumental music
This is the stable version, checked on 21 July 2020.
Jump to: navigation, search

Back to Ladies' Pantalettes (1) (The)

LADIES' PANTALETTES, THE ("Bristide na M-Ban" or "Drairini na Mna Uaisle"). AKA and see "Blue Pantaloons (2) (The)," "Boatman's Reel (The)," "Crooked Road to Dublin (The)," "Duke of Leinster's Wife (The)," "Gardner's Favorite," "Gardiner's Favorite," "Green Pantaloons (The)," "Grey Frieze Breeches (The)," "Johnny Sally's Reel," "Leonard's Reel," "Ladies Pantaloos," "Ladys Pantaloons," "McKeon's," "Pat the Fowler," "Smash the Floor." Irish, Reel. G Major/Mixolydian. Standard tuning (fiddle). AB (Mitchell, O'Neill/1001): AAB (Breathnach, Kennedy, O'Neill/Krassen). Pantalettes were a type of calf-length ruffled undergarment worn by 19th century women underneath their voluminous skirts. O'Neill's titles are "Ladies' Pantalettes" and "Pat the Fowler." Mid-19th century County Cork cleric and uilleann piper James Goodman gave it as "Green Pantaloons (The)" in his manuscript collection, while Gortletteragh, County Leitrim, fiddler Stephen Grier entered it as "Blue Pantaloons (2) (The)" in his c. 1883 manuscript. It appears as an untitled reel from County Clare in Stanford/Petrie (Complete Collection, 1905; No. 906) in the key of 'G' mixolydian, very close in contour to the minor-mode setting printed in Ryan's Mammoth Collection (1883, for which see "Ladies' Pantalettes (2)). Versions differ in tonality from major to minor; in 'sessions' this causes some confusion unless specifically stated before commencing play.

The alternate title "Duke of Leinster's Wife (The)" came from its pairing in a medley with the tune "Duke of Leinster (The)" by the great County Sligo-born New York fiddler Michael Coleman. Perhaps the original title was not remembered, or perhaps, as one story goes, naming a tune after women's underwear was thought in some circles to be indelicate or otherwise unacceptable, so the "Wife" title was devised so as to emphasize the routine pairing of the two melodies (while retaining the gender of the original title). The "McKeon's" title comes from a 78 RPM recording by Frank Quinn, and "Gardner's Favorite" is from a 1928 recording by flute player Sean McKenna and fiddler James Morrison.

An explanation of the "Ladies Pantalettes" title comes from the Irish linguistic scholar Diarmuid O'Muir. It seems that in the days of wooden sailing ships that occasionally great effort would be made to get the very best performance the vessel was capable of. This usually meant 'putting on' as much sail as was possible, and every scrap of available canvas was utilized to that end. The very last tiny sail, situated above the top gallants and the skyscraper at the top of the mast was known as 'the ladies pantalettes'; this not only denoted the size of the sail, but perhaps became motivation for a speedy return to port. 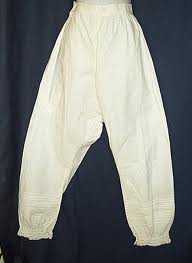 O'Neill (Irish Folk Music, 1910) relates that he first heard this tune while on duty as Desk Sergeant at the Deering Street police station:

The strains of a slashing but unfamiliar reel floating out on the night air from the lowered windows of Finucane's Hall caught my eager ear one Saturday night, when Tommy Owens was playing for a party...as the police station was just across the street, I had little difficulty in memorizing the tune. Although it had never been printed it soon gained wide circulation among experts, and it had become such a favorite with Inspector John D. Shea (the Chief of Detectives), that it has since been identified with his name.

The tune was the first reel learned by Willie Clancy, taught to him by his flute playing father, Gilbert Clancy. One of the earliest recordings of the tune under this title was by piper Eddie Mullaney and fiddler Patrick Stack in Chicago, 1926. Stack was originally from County Kerry, while Mullaney was born in Chicago, although his family moved back to County Mayo before returning to Chicago.

Researcher Jean Duval, in his definitive work on Montreal fiddler Isidore Soucy (1899-1963), finds that a version of "Ladies' Pantalettes [1]" was used in Soucy's very first recording, "Gigue irlandaises (2)", the third and last reel in a medley[1].

See also listing at :
Jane Keefer's Folk Music Index: An Index to Recorded Sources [1]
Alan Ng's Irishtune.info [2]
Hear the tune played by Joe McDonagh, Larry McDonagh and Michael McDonagh at the Comhaltas Archive [3]
Hear the 1926 recording of the tune by Eddie Mullaney and Patrick Stack at the Internet Archive [4] [5]

Back to Ladies' Pantalettes (1) (The)