LADIES HORNPIPE [2], THE. Scottish, Hornpipe. D Major. Standard tuning (fiddle). AABBCCDD. The tune is attributed to Captain Donald Ross "D.R." MacLennan [1] (1901-1984), the less famous younger half-brother of Pipe Major G.S. McLennan, who one of the seminal figures of Highland bagpiping, and a cousin to the almost equally famous Highland dancer and piper William McLennan. It was William McLennan who impressed fiddler-composer J. Scott Skinner, and who died in Canada while on tour with him. 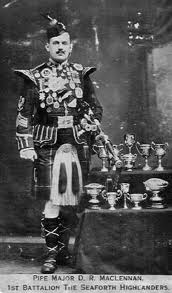 D.R. MacLennan originally entitled the piece "Joe McGann's Fiddle," although it was published in the Scots Guards (1954) settings as "The Ladies Hornpipe", without composer credits. D.R. was a competitor in piobaireachd (a gold medalist), a reed maker and composer.

The tune is popular with Cape Breton fiddlers.