Find traditional instrumental music
This is the stable version, checked on 4 May 2021.
Jump to: navigation, search

Back to Lady Amelia Murray 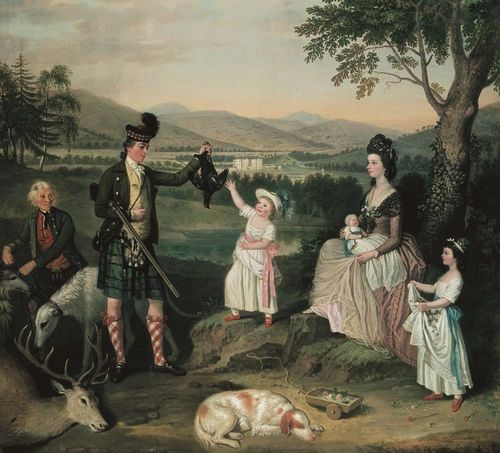 A Family Portrait of John, 4th Duke of Atholl with his First Wife, the Hon. Jane Cathcart, by David Allan. The 4th Duchess is holding John, Marquis of Tullibardine, later 5th Duke of Atholl with Lady Charlotte aged five and Lady Amelia Murray, the center figure, as a toddler. Looking on is Alexander Crerar, gamekeeper to the Duke, with two dogs and a dead stag.
LADY AMELIA MURRAY. Scottish, Strathspey (whole time). D Major. Standard tuning (fiddle). AAB. Composed by Inver, Perthshire, fiddler-composer Niel Gow (1727-1807) for a member of the aristocratic Murray family, who lived in nearby Dunkeld. There are a couple of Lady Amelia Murrays in the family. The first was born in 1763 and died in Wincester in 1818 (although sometimes 1806 is given as the date of death) and was the eldest daughter of John Murray, 3rd Duke of Atholl, and Lady Charlotte Murray, his first cousin. Her marriages (in 1789 to a cavalry captain who died in Jamaica in 1793, and secondly, in 1796, to Sir Richard Grace Gamon, 1st Baronet, MP for Winchester, for whom she bore a daughter), predate the tune's first appearance in Gow's Fifth Collection (1809). Unless Gow composed and named the tune for her prior to her marriages (and did not change the name), the strathspey was more likely named for the Lady Amelia Murray of the next generation of the family.

Among other publications, the melody (attributed to Niel Gow--the name thus spelled correctly) was included in the New and Scientific Self-Instructing School for the Violin' (Providence, R.I., 1847, No. 38, p. 30), by George Saunders, "Professor of Music and Dancing."

Back to Lady Amelia Murray