Back to Lady Arbuthnot's Favorite[edit]

LADY ARBUTHNOT'S FAVORITE. Scottish, Strathspey ("slowish"). D Major. Standard tuning (fiddle). AAB. Composed by fiddler and composer Robert Petrie, born in Kirkmichael, Perthshire, in 1767. Petrie was reputed to have been "a non-conformist" who was "rather wild and unpredictable. It is on record that he won a cup as a first prize in a fiddle competition, which was held in Aberdeen, but there is no evidence that the cup ever reached Kirkmichael" (Neil, 1991).

The tune is for Anne Alves of Shipland (1772–1846), a Doctor's daughter from Inverness, who married an Edinburgh civil servant in 1800, Sir William Arbuthnot (1766–1829). He rose to become 1st Baronet of Edinburgh, Lord Provost of Edinburgh and Lord Lieutenant of the City of Edinburgh. They had five children. In Memoirs of a Highland Lady she is described: 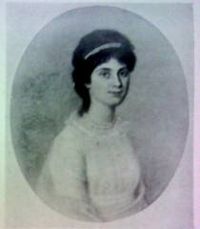 Mrs Arbuthnot very Highland, and they were great favourites... After a visit from [William] and his exellent wife – they were fond of going about together – a deal of what was going on seemed to have suddenly enlightened their listeners, and most agreeably. A tale of scandal never spread from them, nor yet a sarcasm. They, from their situation, saw a great deal of company, and no parties could be pleasanter than those they gave. (8, p. 309).

Lady Arbuthnot was one of the leading ladies of Edinburgh society and well-known for her excellent parties, able to supply a great deal of information about what was going on in the city, but had the reputation for never encouraging scandal or unkindness.

Back to Lady Arbuthnot's Favorite[edit]