Back to Lady Augusta Gordon Lennox[edit]

LADY AUGUSTA GORDON LENNOX. Scottish, Strathspey (whole time). G Minor. Standard tuning (fiddle). AAB. Composed by Aberdeenshire fiddler-composer Alexander Walker. According to Paul Stewart Cranford (1991) the tune still has currency among Cape Breton fiddlers. Lady Augusta Gordon-Lennox (1827-1904) was the daughter of Charles Lennox, Fifth Duke of Richmond-Lennox and Lady Caroline Paget. She was born and died in London. In 1851 she married Prince Edward of Saxe-Weimar, and Queen Victoria granted to her the title of Princess Edward of Saxe-Weimar when she was in England, while in Germany she held the title of Countess of Dornburg. Her husband spent most of his adult life in England serving in the British army, rising to the rank of Field Marshall in 1897. 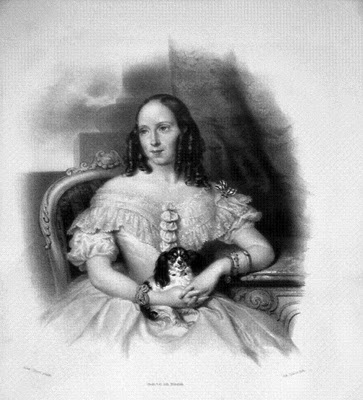 One of the most charming figures in London society--that portion of society that does not advertise itself and is not seen at the parties of the new millionaires or semi-millionaires, South African or American--is the Princess Edward of Saxe-Weimar. As everyone knows, she was the Lady Augusta Gordon-Lennox, a daughter of the Fifth Duke of Richmond, and she married Prince Edward of Saxe-Weimar, a cousin of the Queen. There was of course no question of the marriage being morganatic, as Prince Edward is not a "royal highness", and even if he were, the daughter of an English Duke would be every whit as good as a German prince--and better than most of them. Both Prince and Princess Edward are immensely popular among their intimates. The give delightful luncheon-parties at their house in Portland Place. The Prince of Wales often lunches with them, and the wit and brilliancy of the conversation hardly belong to a day when conversation may be considered a lost art. [p. 506]

Back to Lady Augusta Gordon Lennox[edit]