LADY BAIRD('S STRATHSPEY) [2]. AKA - "Lady Baird's Reel," "Lady Baird's Delight (1)." AKA and see "Lasses of St. Barry's (The)." Scottish, Strathspey (whole time). D Major (Cole): A Major (most versions): G Major (Aird). Standard tuning (fiddle). AB (Cole, Ryan, Surenne): AAB (Balmoral, Davie, Lowe), AABB (Aird, Athole, Gow, Kerr, Skye). The tune has been attributed to Niel Gow's 2nd son, Andrew (1760-1803), who was a partner with his brother John in a music business in London until his death. Curiously, however, there is no composer attribution appended to the tune in the The 2nd Collection of Neil Gow's Reels (1788). "Lasses of St. Barry's (The)", collected in Ireland, is a related reel. Lady Baird was Henrietta Johnston, daughter of Wynne Johnston, 6th Baronet of Hilton, and Margaret Johnston. She married her husband, Sir James Baird, 6th of Saughton Hall, in 1780. Their names appear on a broadside list of attendees at a ball held during the Kelso Races. 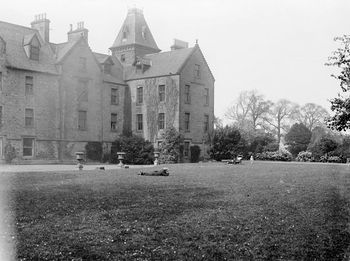 "Lady Baird of Saughtonhall, near Edinburgh, reporting that she had recovered from the effects of the bite of a mad dog by drinking water into which a talisman called the Lee Penny had been immersed. The Lee Penny was the subject of Sir Walter Scott's The Talisman, and is a semi-precious blood-red stone that is said to have healing powers. It was brought back to Scotland from Spain by Simon Lockhart of Lee in 1329 after his journey transporting Robert I's heart. Lady Baird also bathed the affected parts in it in the treated water, "...even though prior to doing so she had already shown some of the distressing symptoms of hydrophobia..." This incident is said by Chambers to have taken place at "the beginning of the last century", meaning the early 1700's.

The tune was included in the music manuscript collection of Abel Stattuck (1759-1816), of Colrain, Massachusetts, and in the large 1840 collection of multi-instrumentalist John Rook, of Waverton, Cumbria.