Back to Lady Betty Hamilton’s Reel[edit] 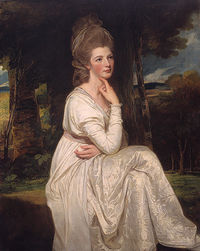 The title honors Lady Elizabeth "Betty" Hamilton (1763-1797), the eldest child and only daughter of the famously beautiful Irish-born Elizabeth Gunning and James, 6th Duke of Hamilton. Her father died when Betty was but five, and her mother remarried to the Duke of Argyll. When Betty came of age (equally beautiful as her mother) she fell in love with John Frederick, Duke of Dorset, who first courted her but then left to go on an extended Grand Tour. Seeing no prospect in waiting for him, she eventually found a substitute in Edward Smith-Stanley, Earl of Derby, who, while not as handsome as Dorset, was equally as rich, and the couple married in June, 1774. She bore him a son and daughter, and the family spent time between their house in London and their estate in Yorkshire. However, by 1777 Dorset returned from his travels, and, since they shared similar social circles, Betty became reacquainted with her first love, particularly as she was unhappy in her marriage. They soon proceeded on a torrid affair, were indiscreet, and were revealed. Betty may have wished for a divorce so she could marry Dorset, but Derby was not inclined to grant one, and she remained in limbo, having abandoned her family and not able to proceed with a new life. She and Dorset remained together for a time, but when he was appointed Ambassador to France he left without her. She removed to the Continent as well for a time, but in reduced circumstances, and returned to England after a few years. She died of tuberculosis at the age of 44, in 1797.

Back to Lady Betty Hamilton’s Reel[edit]