Back to Lady Caroline Bligh's Reel

LADY CATHERINE/CAROLINE BLIGH'S REEL. AKA - "Lady Catherine Bligh's Reel." AKA and see "Down the Street," "Nimble Fingers (1)." Scottish (?), Reel (cut time). G Major. Standard tuning (fiddle). AAB. Lady Caroline Bligh (1775-1812) whose name is more often given as 'Catherine') was the first daughter of the 3rd Earl of Darnley, who married Charles William Vane Stewart [1] (1778-1856), Marquis of Londonderry, in 1804. He was an Irish soldier in the British army and a politician. She died in 1812 of fever following a minor operation, while her husband was on active service in the Peninsula Campaign in the wars with Napoleon. 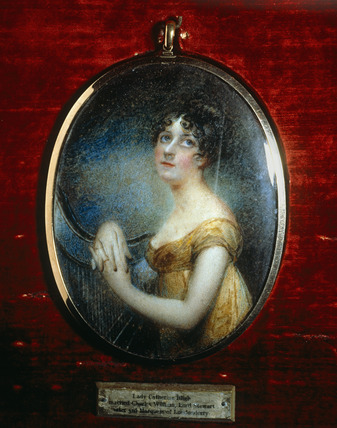 The reel was composed by Edinburgh fiddler-composer and bandleader Robert Mackintosh (c. 1745-1808) as "Lady Catherine Bligh's Reel." "Nimble Fingers (1), printed in Ryan's Mammoth Collection (1883), is nearly identical, save for a change of key. Both tunes are cognate versions of "Miss Thornton’s Reel."

The tune appears in the large mid-19th century music manuscript collection of County Cork cleric and uilleann piper Canon James Goodman, who included another version of the reel under the title "Down the Street."

Back to Lady Caroline Bligh's Reel