Back to Lady Charlotte Cadogan 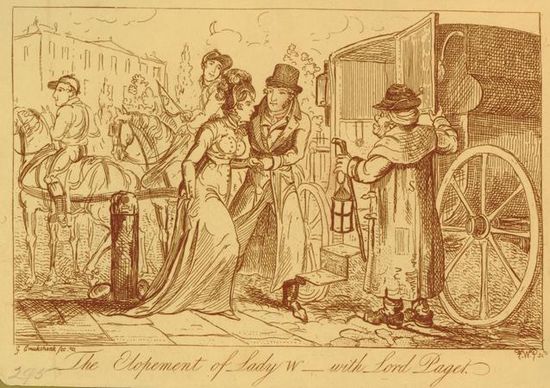 The Elopement of Lady W(ellesley) with Lord Paget. George Cruickshank, an illustration to Moore's Annals of Gallantry or The Conjugal Monitor (1814).
LADY CHARLOTTE CADOGAN'S REEL. AKA and see "Firth of Cromortie (The)." Scottish, Reel (whole time). G Major. Standard tuning (fiddle). AB. "Lady Charlotte Cadogan's Reel" was composed by Edinburgh fiddler-composer and bandleader Robert Mackintosh (c. 1745-1808) and printed in his Fourth Collection of New Strathsey Reels (c. 1804). Around the same time it was printed in London by the Gows as "Firth of Cromortie (The)," without composer credits to Mackintosh.

At the time Mackintosh composed the reel, Charlotte Cadogan (1781-1853), daughter of the former Mary Churchill and Charles Cadogan, 1st Earl Cadogan, MP for Cambridge and Master of the Mint, had been newly awarded the courtesy title of 'Lady' when her father was raised to the peerage in 1800. In September, 1803, she married Henry Wellesley, younger brother of Arthur Wellesley, 1st Duke of Wellington, and with him had four children. However, in 1810 the couple was divorced on grounds of her adultery with the Marquess of Anglesey, then Lord Paget. After the messy scandal that included a divorce from Paget by his first wife, Lady Charlotte and Paget were married, and she gave birth to another ten children (of whom seven survived infancy). When Paget was raised to the peerage in March, 1812, Lady Charlotte became the Countess of Uxbridge and upon his further elevation in 1815, she became the Marchioness of Anglesey. She died in 1853, followed by Paget a year later.

Back to Lady Charlotte Cadogan