Back to Lady Charlotte Gordon[edit]

LADY CHARLOTTE GORDON. Scottish, Reel. F Major. Standard tuning (fiddle). AAB. Composed by William Marshall (1748-1833), Steward of the Household for the Alexander, 4th Duke of Gordon. The reel appears first in print in his 1781 collection. Lady Charlotte (1768-1842) was first daughter of the Duke and his Duchess, the beautiful Jane Alexander, born in 1768 at Gordon Castle, Bellie, Morayshire, Scotland. In 1780 Charlotte married General Charles Lennox, the 4th Duke of Richmond (at the time a Lieutenant-Colonel). Nine years late Gordon challenged HRH Prince Frederick, Duke of York, to a duel and nearly killed him with a grazing shot to the head (the Duke declined to to fire in return, honor satisfied). As a result of her marriage, Lady Charlotte Gordon was styled as Duchess of Richmond on 29 December 1806. In Brussels, the night before the Battle of Quatre Bras (prior to Waterloo), the Charlotte gave a famous grand ball, immortalized in poetry by Lord Byron. Charles Lennox was in attendance (he commanded a reserve force in Brussels, to guard against an invasion by Napoleon), as was nearly every high officer in Wellington's army.

Mary Robinson, in her book Beaux and Belles of England, composed this sketch of her:

Lady Charlotte, the eldest, was eighteen years of age when her mother first entertained matrimonial projects for her, and chose for their object no less a personage than Pitt, then prime minister. Her schemes might have proved successful had not Pitt had that sure impediment to maternal management--a friend. This friend was the subtle Henry Dundas, afterward Lord Melville; one of those men who, under the semblance of unguarded manners and a free, open bearing, conceal the deepest designs of personal aggrandisement. Governing India, governing Scotland, the vicegerent in Edinburgh for places and pensions, Dundas was looking forward to a peerage, and kept his eye steadily on Pitt, whom he guided in many matters, adapting his conduct and his conversation to the peculiar tone of the minister's mind. Flattery he never used-dictation he carefully avoided; both would have been detrimental to his influence with the reserved statesman. 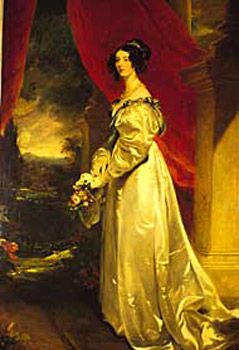 Pitt was by no means calculated to win the affection of a blooming girl of eighteen, who, whatever Wraxall may have thought, lived to be one of the most beautiful and graceful women of her time. Many years ago, during the live of Sir Thomas Lawrence, his portrait of the Duchess of Richmond, formerly Lady Charlotte Gordon, was exhibited at Somerset House. So exquisite were the feminine charms of that lovely face, so elegant the form he had portrayed, that all crowded to look upon that delineation of a woman no longer young; whilst beauties in the bloom of youth were passed by as they hung on the walls in all the glowing colours of girlhood.

On most intimate terms with the duchess, Pitt seems to have been touched with the attractions of Lady Charlotte, and to have paid her some attentions. He was one of the stiffest and shyest of men, finely formed in figure, but plain in face; the last man to be fascinated, the last to fascinate. Drives to Dundas's house at Wimbledon when Pitt was there; evenings at home, in easy converse with these two politicians; suppers, at which the premier always finished his bottle, as well as the hardier Scotchman, failed to bring forward the reserved William Pitt. The fact was, that Dundas could not permit any one, far less the Duchess of Gordon, to have the ascendancy over the prime minister that so near a relationship would occasion. He trembled for his own influence. A widower at that time,--his wife, a Miss Rennie of Melville, who had been divorced from him, being dead,--he affected to lay his own person and fortune at Lady Charlotte's feet. Pitt instantly retired, and the sacrifice cost him little; and Dundas's Object being answered, his pretensions also dropped through. Two years afterward, Lady Charlotte became the wife of Colonel Lennox, afterward Duke of Richmond, and in the course of years the mother of fourteen children; one of whom, Henry Adam, a midshipman, fell overboard from the Blake in 1812, and was drowned. According to Wraxall, the Duke of Richmond had to pay the penalty of what he calls "this imprudent, if not unfortunate marriage," being banished to the snowy banks of St. Lawrence under the name of governor.

Lennox never came home from Canada, expiring from rabies contract from the bite of a pet fox.

Back to Lady Charlotte Gordon[edit]