Find traditional instrumental music
This is the stable version, checked on 6 October 2021.
Jump to: navigation, search

Back to Lady Charlotte Murray (1)

LADY CHARLOTTE MURRAY [1]. AKA and see "Cat in the Corner (1) (The)," "Felix the Wrestler," "O'Mahoney's Frolics," "O'Shaughnessy's," "Puss in the Corner." Scottish, Jig. D Mixolydian (Gow): A Mixolydian (Gunn). Standard tuning (fiddle). AAB. A double-tonic tune composed by Dunkeld, Perthshire, fiddler-composer Niel Gow (1727-1807). The tune honors one or both a mother and daughter named Lady Charlotte Murray. A third Lady Charlotte Murray (1775-1832) was granddaughter of the eldest Lady Charlotte Murray, however, since she was aged nine when Gow published his melody, it is unlikely that he wrote for her.

The elder Lady Charlotte [1] (1731-1805) was the daughter of the 2nd Duke of Atholl. In 1753, she married her first cousin, John Murray at Dunkeld, Scotland (also home to Niel Gow). John Murray should have ascended to the Dukedom upon the death of the 2nd Duke, however, as his father had fought on the Jacobite side he was prevented from inheriting. Lady Charlotte, however, had ascended to the title of Baron Strange (which could descend through the female line), and thus outranked her husband--for a short while, for in 1764 the House of Lords returned the Dukedom to John and he became the third Duke of Atholl, at which time Lady Charlotte became Duchess. 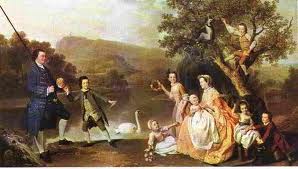 Her daughter, Lady Charlotte Murray (1754–1808), Viscountess of Strathallan, was a horticulturist who, in the year of her death, published a book entitled The British Garden, a Descriptive Catalogue of Hardy Plants, Indigenous or Cultivated in the Climate of Great Britain, with Their Generic and Specific Characters, Latin and Wnglish Names, Native Country, and Time of Flowering. (London, Thomas Wilson, 1808). Lady Charlotte, the daughter, never married. 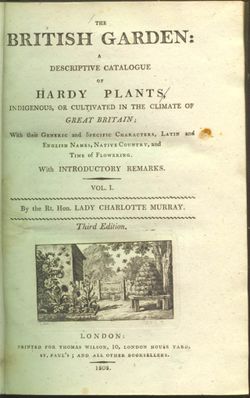 Poet Robert Burns stayed with the family of the 4th Duke of Atholl at Blair Atholl in 1787, later noting they were among the happiest days of his life. John Murray and his wife gracious and hospitable, and was charmed by their family. The Murrays were so pleased to have Burns company that it is said they sent a servant to bribe the driver of the chaise to pull off one of the horse's shoes in an effort to delay his departure, although the driver refused. Burns remarked on the 'angel band' he met there, consisting of the youngest Lady Charlotte (1775-1832), then aged 12, her sister Amelia (7) and the infant Elizabeth. This family impression found its way into a poem he wrote soon after leaving Bair Atholl, inspired by the beauty of a nearby waterfall on the River Bruar:

So may old Scotia's darling hope,
Your little angel band,
Spring, like their fathers, up to prop
Their honoured, native land!
So may, through Albion's farthest ken,
To social-flowing glasses,
The grace be--' Athole's honest men,
And Athole's bonnie lasses!'

The Lady Charlotte married Sir John Menzies, 4th Baronet of Castle Menzies, in 1797, and, after he died three years later (and the marriage being without issue), she took a second spouse, Sir Adam Drummond. She too took an interest in horticulture, and, with her 2nd husband, undertook to improve the trees and gardens at the family estate of Megginch. The gardens she laid out have been kept by generations of Drummonds. [See also William Marshall's tune "Lady Menzies of Castle Menzies," possibly composed for her after her marriage to Menzies if the tune was composed from 1797 to the early years of the 19th century. However, there were subsequent 'Lady Menzies of Menzies' of the the 5th and 6th baronets prior to Marshall's death.] See also Malcolm MacDonald's tune for her (after her first marriage), "Lady Charlotte Menzies."

Back to Lady Charlotte Murray (1)