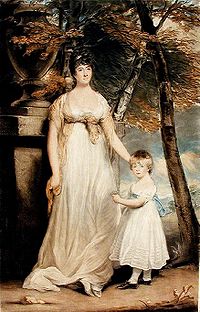 Lady Cholmondeley and her son Henry (1805), by Charles Turner

LADY CHOLMONDLEY'S WALTZ. English, Waltz. D Major. Standard tuning (fiddle). AABBCC. The Cholmondeley family have lived at Cholmondeley Castle since the 12th century, surrounded by a 7,500 acres estate near Malpas, Cheshire. From the dates of publications containing the melody, it may be surmised that Lady Cholmondley was perhaps Lady Georgiana Charlotte Bertie, the wife of George Cholmondeley (1749–1827), 1st Marquess of Cholmondeley, whom she married in 1791. Through this marriage the ancient hereditary office of Lord Great Chamberlain came into the Cholmondeley family. Her daughter was Lady Charlotte Georgiana Cholmondeley (1795–1828), who married Lieut.-Col. Hugh Henry Seymour in 1818.