Find traditional instrumental music
This is the stable version, checked on 8 July 2020.
Jump to: navigation, search

Back to Lady Coventry's Minuet

LADY COVENTRY'S MINUET. English, Minuet (3/4 time). England, Northumberland. G Major. Standard tuning (fiddle). AABB. A very popular tune on both sides of the Atlantic, from the mid-18th century until the beginning of the 19th, appearing in numerous country dance publications, instrumental tutors, and musicians commonplace and copybooks. The earliest appearance of the tune in print (courtesy of the EASMES site) is in Joseph Hill's The Compleat Tutor for the German Flute (London, 1762), and Thorowgood and Honrne's The Compleat Tutor for the Guitar (London, 1763).

Maria and Emily Gunning (1733-1760), the 'gorgeous Gunnings', were the daughters of a poor Irish squire, who both married well: Maria to the 6th Earl of Coventry and Emily to the Duke of Hamilton. Both women were famous society beauties and the toasts of London in the 1750's, but Maria paid a price for her vanity: it is said that she was poisoned to death by wearing an excess of lead-based cosmetics. Interestingly, the girls were the great-great-great granddaughters of the female Irish pirate Grace O'Malley (see note for "Graine Maol/Graine Mhaol"). Horace Walpole, writing to Mann, says:- 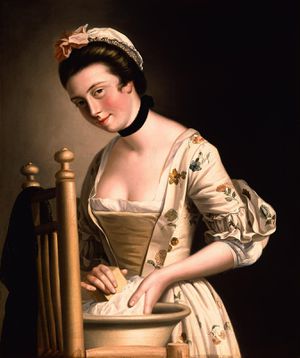 A Woman Doing Laundry by Robert Morland (1719?-1797). It has been suggested that this picture shows Maria Gunning.

The event that has made most noise since my last is the extempore wedding of the youngest of the two Gunnings, two ladies of surpassing loveliness, named respectively Mary and Elizabeth, the daughters of John Gunning, Esq., of Castle Coote, in Ireland, whom Mrs Montague calls "those goddesses the Gunnings." Lord Coventry, a grave young lord, of the remains of the patriot breed, has long dangled after the eldest, virtuously, with regard to her honour, not very honourably with regard to his own credit. About six weeks ago Duke Hamilton, the very reverse of the earl, hot, debauched, extravagant, and equally damaged in his fortune and person, fell in love with the youngest at the masquerade, and determined to marry her in the spring. About a fortnight since, at an immense assembly at my Lord Chesterfield's, made to show the house, which is really most magnificent, Duke Hamilton made violent love at one end of the room, while he was playing at Faro at the other end; that is, he saw neither the bank nor his own cards, which were of three hundred pounds each: he soon lost a thousand. I own I was so little a professor in love that I thought all this parade looked ill for the poor girl; and could not conceive, if he was so much engaged with his mistress as to disregard such sums, why he played at all. However, two nights afterwards, being left alone with her, while her mother and sister were at Bedford House, he found himself so impatient that he sent for a parson. The Doctor refused to perform the ceremony without license or ring; the duke swore he would send for the archbishop; at last they were married with a ring of the BED-CURTAIN, at half-an-hour after twelve at night, at May-fair Chapel. 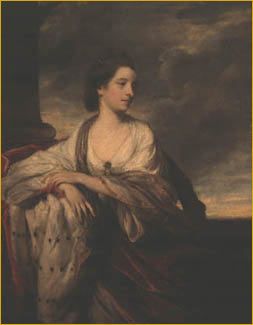 The melody appears in the music manuscript copybooks of Ralph Pomeroy (Connecticut, 1790-1796), and Henry Livingston, Jr. Livingston purchased the estate of Locust Grove, Poughkeepsie, New York, in 1771 at the age of 23. In 1775 he was a Major in the 3rd New York Regiment, which participated in Montgomery's invasion of Canada in a failed attempt to wrest Québec from British control. An important land-owner in the Hudson Valley, and a member of the powerful Livingston family, Henry was also a surveyor and real estate speculator, an illustrator and map-maker, and a Justice of the Peace for Dutchess County. He was also a poet and musician, and presumably a dancer, as he was elected a Manager for the New York Assembly's dancing season of 1774-1775, along with his 3rd cousin, John Jay, later U.S. Chief Justice of Governor of New York. In England it appears in the Benjamin Cooke MS., c. 1770, and as a tune to be played for retreat (signalling end of military duties for the day) in John Buttery's large music manuscript collection, from the turn of the 19th century. Buttery was a fifer with the 37th Regiment who saw active service in the early years of the 19th century. He emigrated to Ontario, Canada, near the end of his life and his music manuscript was handed down in the family (it is sometimes referred to as the 'John Fife' ms., after a relative).

Back to Lady Coventry's Minuet