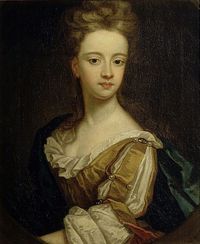 The title probably refers to Lady Mary Bentinck [1] (1679-1726), Countess of Essex, the daughter of Hans William Bentinck, 1st Earl of Portland. In 1698 she married Lt.-Gen. Algernon Capell, 2nd Earl of Essex, and as a result was styled the Countess of Essex. She was considered one of the most lovely women at the court of William and Mary, so that she was awarded not one but two exclusive Kit-Cat Club toasts, said to have been written by Dr. Garth. One of them goes:

To Essex fill the Sprightly Wine
The healths immortal and Divine
Let purest Odours Scent the Air
And Wreaths of Roses bind her hair
On her Chaste lips these blushing lie
And those her gentle sighs supply.

Mary outlived Algernon (who died in 1710, the year the tune bearing her name appeared in the Dancing Master) and in 1714 she married again, to Sir Conyers Darcy. She died on 20 August 1726.