Back to Lady Georgina Gordon[edit]

LADY GEORGINA GORDON. Scottish, Reel. D Minor. Standard tuning (fiddle). AB. Composed by Robert "Red Rob" Mackintosh. Lady Georgiana (1781-1853) was the daughter of Alexander, 4th Duke of Gordon, and his wife, the beautiful Jane Maxwell. She evidently loved to dance, as we see in this excerpt from a London paper called The Star (06/01/1799), which reported on a recent ball at Oatlands Palace, Surrey, England:

At the fete given by Her Royal Highness, the Duchess of York, at Oatlands on the 30th of May (1799), the dances were as follows: 1. Ramah Droog. 2. Miss Murray of Auchtertyre. 3. The Tartan Plaidie. 4. Lady Harriet Hope's Reel. And lastly, the enchanting tune of Miss Gordon of Troupe's Strathspey was called for by Princess Augusta, and danced twice over by all the fet. Between the second and third dance, Their Majesties desiring to see the Highland Reel in all its purity, it was danced by the Marquis of Huntley and the Lady Georgiana Gordon, Colonel Erskine and Lady Charlotte Durham, with all the elastic motion, hereditary character, and boundless variety of the Scottish dance. 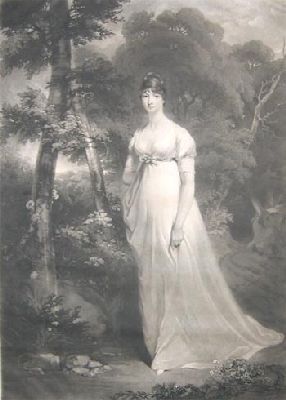 After first being engaged to his brother, Georgiana became the second wife of John Russell, 6th Duke of Bedford, with whom she had twelve children (10 of whom lived to adulthood). Georgiana may or may not have had a long-term affair with artist Edwin Landseer (1802-1873), twenty years her junior. Certainly Landseer painted her many times, with an intimacy that proved shocking for the times. Her last child, Lady Rachel Russell (born when she was 45), is thought by some to have been Landseer's child. Georgiana became a prominent Whig hostess, and Sydney Smith described her as “full of amusement and sense." 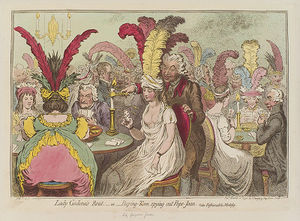 A cartoon said (by the National Portrait Gallery) to depict Georgiana Gordon. The group is playing a card game called Pope Joan (the nine of diamonds she holds in her hand is known as 'Pope'), while a lecherous servant peers down at her (thus the caption "Lady Godina's Rout", a play on the name Georgiana and Lady Godiva).

Back to Lady Georgina Gordon[edit]