Back to Lady Hamilton (3)

LADY HAMILTON [3]. AKA – “Lady Hamilton’s Reel.” AKA and see "Countess of Sutherland (1)," "Glasgow Ladys," "Lady Sutherland," "Ridge (The)." Scottish, Reel. B Flat Major. Standard tuning (fiddle). AAB. "Lady Hamilton [3]" ia a composition attributed to George Jenkins who was a Scottish dancing teacher in London about the year 1794, when he probably published his collection of New Scotch Music, &c, dedicated to the Prince of Wales. John Glen (1895) is of the opinion that Jenkins composed a few good reels and strathspeys, but that "a number of his tunes do not possess the true Scottish character." 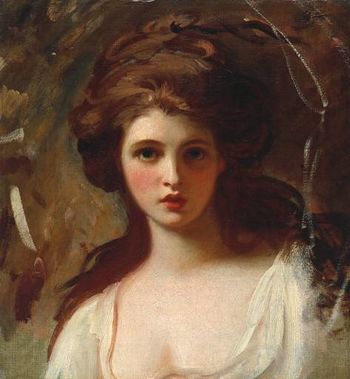 Lady Hamilton as Circe. By George Romney ca. 1782
However, versions of the tune under other titles also existed around the the same time: Joshua Campbell printed versions in this 1778 and 1789 collections (see "Glasgow Ladys"), without attribution, and Niel Gow printed it as "Countess of Sutherland (1)."

The most famous Lady Hamilton (perhaps the subject of the title) was Emma Hart (1765-1815), a beautiful woman of great charm who rose from humble (and perhaps questionable) beginnings to win international fame. Emma became Lady Hamilton in 1791. She was the mistress of Charles Greville who educated her in music and literature, but it was his uncle, Sir William Hamilton, the British Ambassador to Naples, whom she married. She entertained guests with her "attitudes", a kind of Romantic aesthetic posturing achieved with the aid of shawls and classical draperies, and she was often painted in different aspects or guises--George Romney (1734-1802) did no less than twenty paintings of her. She became the mistress of Lord Horatio Nelson, a notorious affair that lasted until his death at the battle of Trafalgar. Unfortunately, although Emma had inherited money from both Nelson and Hamilton, she lived to excess, incurred debt and died in poverty. 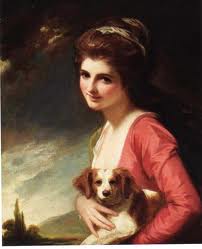 The reel appears as "Ridge (The)" in George P. Knauff's Virginia Reels, vol. 1), published in Baltimore around 1839.

Back to Lady Hamilton (3)