Find traditional instrumental music
This is the stable version, checked on 24 June 2020.
Jump to: navigation, search

Back to Lady Jean Lindsay's Minuet

LADY JEAN LINDSAY'S MINUET. Scottish, Minuet (3/4 time). F Major. Standard tuning (fiddle). AA'BB'. Composed by Daniel Dow (1732-83) of Perthshire and Edinburgh. The tune first appeared in the (James) Gillespie Manuscript of Perth (1768) as "A New Minuet," and he must have later selected a patron, for it appears under the "Lady Jean" title in his 1773 collection. 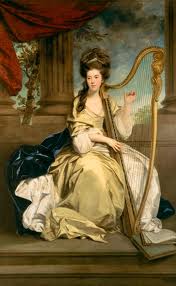 The tune was perhaps composed for Lady Jean Lindsay {1756-1778}, the eldest daughter of John Lindsay-Crawford, 4th Viscount of Garnock and later 21st Earl of Crawford. The beautiful Jean was married at the age of 16 (in 1772) to Archibald Montgomerie, 11th Earl of Eglinton, but only lived another six years. She must have been a music lover, for Sir Joshua Reynolds painted her portrait with a full-size harp prominent. She died without issue and he married again. See also another tune probably in her honor, "Lady Eglintoune").

Back to Lady Jean Lindsay's Minuet