Find traditional instrumental music
This is the stable version, checked on 8 November 2022.
Jump to: navigation, search

Back to Lady Louisa Gordon

LADY LOUISA GORDON'S REEL. AKA and see "Little Peggy's Love (2)," "Miss McLeod’s Favorite/Fancy," "Miss Farquharson of Invercauld's Strathspey (1)," "Peggy's Love." Scottish, Strathspey. F Major. Standard tuning (fiddle). AABB. Composed by William Marshall (1748-1833), and first appearing in print in his 1781 collection. Robert Burns called Marshall "the greatest composer of strathspeys of the age." Madame Hillsburgh, a celebrated stage dancer of the first half of the nineteenth century, danced to this tune at the Edinburgh Opera House (before 1845). The Gows renamed the tune "Miss M'Leod's Fancy" and did not give composition credit to Marshall until their Sixth Collection. The melody can be found in Marshall's posthumous collection (1845) under the title "Miss Farquharson of Invercauld's Strathspey (1)." Marshall was employed by the Duke of Gordon as Steward of the household, and later served as Factor of the Gordon estates. 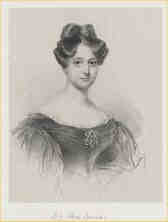 Lady Louisa was the fourth daughter of the beautiful and witty Jane Maxwell. Louisa's father was Alexander, 4th Duke of Gordon (Marshall's patron and employer), but Moyra Cowie (The Life and Times of William Marshall, 1999) says that daughter Louisa was reputed not to have been a Gordon child. "When Louisa married...Jane Maxwell insisted Louisa 'had not a drop of Gordon blood in her veins!', in response to the Marquis's concerns that insanity ran in the Duke of Gordon's family." Jane was "indefatigable in her ambition," writes Mary Robinson (Beaux and Belles of England), and, although her daughters were far less beautiful than she, skilful diplomacy found exquisite matches for each of them. Louisa married Charles, Lord Broome, the son of the Marquis of Cornwallis, "the justly celebrated Governor of India." Charles succeeded his father as the second Marquis of Cornwallis.

Back to Lady Louisa Gordon