Find traditional instrumental music
This is the stable version, checked on 22 September 2022.
Jump to: navigation, search

Back to Lady Madelina Sinclair (1)

LADY MADELINA SINCLAIR [1]. AKA - "Lady Madeline Sinclair," "Miss Madelina Sinclair's Strathspey." AKA and see "Braes of Aberarder, "Brown Cow Jumped over the Heather (The)," "Tailor's Wife (The)." Scottish, Strathspey. A Major (most versions): A Mixlydian (Ross): G Major (Kennedy, Surenne). Standard tuning (fiddle). AB (Hardie, Kerr, Surenne): AAB (Athole, Balmoral, Glen, Gow, Honeyman, Hunter, Kennedy, Martin, Ross, Skye). Lady Madelina Sinclair (1772-1847) was the second daughter of Alexander, 4th Duke of Gordon, and William Marshall's employer and patron. Her second husband was named Charles Fyshe Palmer Esq. (see note for "Lady Madelina Palmer's Strathspey (1)" and "Lady Madelina Sinclair's Birthday") of Luckley Hall, Berkshire, whom she wed in 1804, however, her first husband was Sir Robert Sinclair of Murtle, who died in 1795 when she was twenty-three. According to Mary Robinson (Beaux and Belles of England), the daughters of Alexander and his wife Jane, the Duchess of Gordon, were far less beautiful than their mother. It was due "to her skilful diplomacy alone" that they married well and into fortune. "Lady Madeline was not handsome," writes Robinson, "but (was) extremely agreeable, animated, and intellectual. Among her other conquests was the famous Samuel Parr, of Hatton, who used to delight in sounding her praises, and recording her perfections with much of that eloquence which is now fast dying out of remembrance..." She was also acknowledged as a remarkably graceful dancer. The Morning Post of June 29, 1803, recorded in detail the Duchess of Gordon's Ball as a news item, listing the attendees, dances, and events of the evening:

Lady Madelina Sinclair was the best dancer in the room, and it is even said she is the best in England; the Duke of Orleans, who danced with her Ladyship after supper, was completely worn out long before the conclusion of the dancing.

Second husband Palmer (b. circa 1770) became the M.P. for Reading between 1818 and 1841, and advocated reform principles of Roman Catholic emancipation, Parliamentary reform and the abolition of slavery. Richardson's Recollections gives: 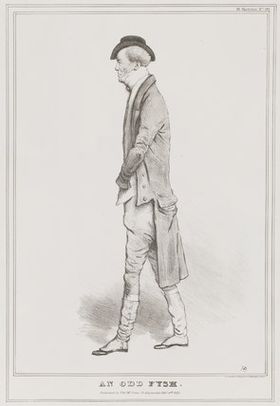 [He was] ... a man of remarkable appearance; in height six feet three, upright and by no means overburdened with flesh or fat; his limbs, loosely joined without elegance or muscular development; his features relieved from insipidity by positive ugliness; his costume that of bygone days, but smart and well-appointed; his manners those of a gentleman of the old school...

Madelina's wealth and family connections were of considerable benefit to Palmer's career. He is buried with her second husband in St James's Church, Finchampstead, Berkshire, England.

MacDonald, in his Skye Collection, repeats the composer credit Niel Gow (1727-1807) awarded himself that appears in the Gow's Third Collection of Strathspey Reels of 1792. However, Charles Duff had a prior claim to authorship of (at least a prototype of) the tune under the title "Braes of Aberarder," which he earlier published in 1790 (Emmerson, 1971). The tune also appears in Angus MacKay's c. 1840's collection of pipe tunes. Christine Martin (2002) notes the tune is the vehicle for a popular Scots song (albeit with sometimes bawdy words) in the Gaelic puirt a beul tradition, called "A' bhean a bh'aig an taillear chaol" (The skinny tailor's wife). A version of "Lady Madelina Sinclair" was also printed in Glasgow piper, pipe teacher and pipe maker William Gunn's Caledonian Repository of Music Adapted to the Bagpipe (1848) as "A bhean a bh'aig an Tàiller Chaol"/"The Tailor's Wife."

Back to Lady Madelina Sinclair (1)