Find traditional instrumental music
This is the stable version, checked on 30 June 2019.
Jump to: navigation, search

Back to Lady Minto's Favourite 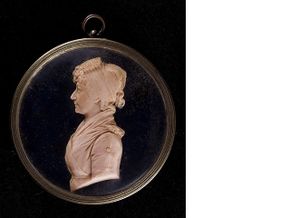 LADY MINTO'S FAVOURITE. Scottish, Slow Jig (6/8 time). A Major. Standard tuning (fiddle). AABB. Composed by John(ny) Pringle (born c. 1770) and published in his first collection in Edinburgh, 1801. The title honors Anna Maria Amyand, daughter of the 1st Baronet Amyand, whose parents had died within a year of each other, leaving her orphaned at age 14, and Maria and her younger sister (age 5) were brought up by Lady Northhampton, their uncle's wife. Her brother inherited the family estates, but the Minto family was in debt, and the upkeep of the estate expensive. Maria met Sir Gilbert Elliot [1] around 1772, when he was 21 and she 20. Ellit's father initially objected to the union, probably holding out for a better financial match for his son, but in 1777 the couple did wed. Elliot became Lord Minto from 1797 to 1813, then was raised to the title Earl Minto for his service as Governor-General of India (1807–1813). Maria was left for long periods of time to run Minto, their estate in Roxburghshire, while her husband was in public service. She was said to have been passionate about the estate, and the Borders region.

In correspondence with a friend, Maria wrote of the Kelso Races:

[There is] excellent sport and good balls, where I flatter myself with having made new conquests in an uncommon way, some by talking, some by laughing, some by dancing, and some by strong beer; how shocked will you be at this last, it is not at all sublime or delicate, but purely rustic and natural.

Back to Lady Minto's Favourite