Back to Lady Rachel Russell[edit]

LADY RACHAEL RUSSELL. Scottish, Strathspey. F Major. Standard tuning (fiddle). AAB. Composed by William Marshall (1748-1833). Moyra Cowie, in her book The Life and Times of William Marshall (1999) reports that Lady Rachel Evelyn Russell was born in 1826, reputedly the daughter of Lady Georgianna Gordon, the Duchess of Bedford, and the famous artist Edwin Landseer with whom she had a passionate affair. Lady Georgianna was then the wife of John Russell, the 6th Duke of Beford, Woburn Abbey, who had brought three stepsons into the marriage. (See also note for "Duchess of Bedford's Cairn (The)"). At age 30, in 1856, Rachael married Lord James Butler. Donald Shaw wrote the following verse for the occasion (published in his Highland legends and fugitive pieces of original poetry , Edinburgh, 1859): 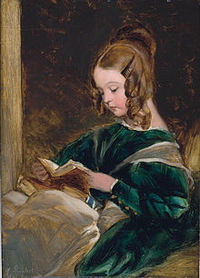 COMPOSED UPON THE HAPPY OCCASION OF THE MARRIAGE OF LORD JAMES W. BUTLER AND THE FAIR AND ACCOMPLISHED LADY RACHEL E. RUSSEL.

When the dread roar of cannon was hushed in the east.
And our good Queen reposed with peace in her breast,
Was ingrafted a flower from the distant Glenmore,
With a twig of the shamrock from Erin's green shore.

The bagpipes were sounding, the bonfires did blaze,
Old and young, rich and poor, were alike in her praise,
We called back to mind tlie happy days of yore,
And the deeds of the noble who now are no more.

And when in the evening we joined in the throng
"Happy may she be" were the words on each tongue,
Her health was drunk with glee, amid deafening roar,
And still was the cry 'hip! one cheer more."

But now, noble lady, though you've altered your name,
We indulge the bright hopes of your presence again,
That you and your loved one may shortly come o'er,
And remain for a while near your favourite Glenmore.

She was a writer, publishing the novels Jessie Cameron: a Highland Story in 1857 and The Prophecy in 1863. The latter is the "story of Bulters of Kilkenny, supposedly based on MS found in Brussels in 1822 by Earl of Clancarty; deals with prophecy of Black Earl regarding loss of fortunes and restoration by Jimmy Butler of Kilcash, concerning granting of estatess to Sir Richard Preston by James II, and the elopement of Lady Elizabeth Preston (all circumstances in the biography of Duke of Ormonde)." The former novel (Jessie Cameron) won a brief if mild approval from literary critic George Meredith of the Westminster Review, for its 'deep feeling, void of sentimentality', who concluded it was a 'simple story, simply told' that 'weighs more than a pile of fashionable novels in the critical scale'. Some of her books can still be found in print. She died in 1898.

Back to Lady Rachel Russell[edit]