Find traditional instrumental music
This is the stable version, checked on 17 March 2021.
Jump to: navigation, search

Back to Lady Washington's Reel

LADY WASHINGTON'S REEL. American, Reel. "Lady Washington's Reel" is a dance first appearing at the end of the 18th century. It was retained in dance repertoire and was a staple New England contra dance of the 19th century. Dance instructions were published in J. Trumbull's Gentleman's and Lady's Companion; Containing, the Newest Cotillions and Country Dances, to Which is Added, Instances of Ill Manners; to be carefully avoided by Youth of both sexes (1798) and Nathan Allen's Select Country Dances (New Hampshire, 1799). Trumbull suggests using "York Fusileers (The)" as the vehicle for the dance. Ralph Page notes that in Vermont in the early 20th century the dance "Lady Washington's Reel" was the same figure as "Lady Walpole Reel (1)" (see Lady Walpole Reel (1)), however, the melody that the Plymouth Vermont Orchestra played is different than either "York Fusiliers" or "Lady Walpole Reel." 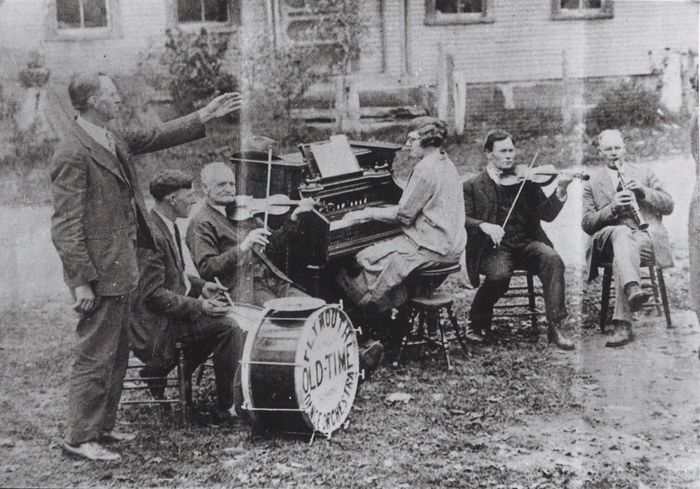 The Plymouth Vermont Old Time Barn Dance Orchestra
The Plymouth, Vermont, orchestra recorded "Lady Washington's Reel" in New York, NY, on Monday, October 25, 1926; it was their only recording session and yielded two sides (along with "Portland Fancy (1)"). Perhaps riding the burst of nostalgia prompted by Henry Ford and his quest to restore old time dancing, for a brief time the Plymouth band played movie houses and variety stages and were managed by the William Morris agency. Variety (1926) noted the signing:

Plymouth, Vt, Oct. 5. This little village is apalled at all of the publicity given to its local dance band. The latter, as reported, has been placed under contract by William Morris of New York to tour as entertainers. It will open first at Loew's State. Boston, on Oct. II. for the week.

The Plymouth, Vermont, Barn Dance Orchestra" is the official title given the six pieces, five men and a woman (pianist), headed by John Wilder, uncle of President Coolldge.

During the "act" Uncle John will play a violin solo. Four of the members of the orchestra arc related to Mr. Coolldge.

Pathe News (film) Weekly is this week showing the band in action at its Plymouth home.

Five relatives of President Coolidge, who live in Plymouth. Vt., his old home town, have formed an old-time dance orchestra which will tour the United States, starting late this month. Meanwhile they engage in a little outdoor practice and some of the townsfolk 'all join hands and circle right' to the time-honored tunes of the quintette of Coolidge cousins. From left to right: Herbert Moore, cousin, is official spokesman, calling the dances; Linn Cady, cousin, pounds the drums; John Wilder, uncle, caresses a fiddle; Mrs. Cassie Cady, cousin, pumps the antiquated organ; Lewis Carpenter, only a schoolmate of the president, plays second fiddle; Clarence Blanchard, cousin, pipes a mean clarinet.

The public reception was decidedly lukewarm, and sales of the record were modest and did not warrant another recording date. Uncle John Wilder was born in 1846, making him one of the oldest fiddlers to make a sound recording. He was an uncle to Coolidge (his wife Gratia was a sister to Coolidge's mother), who (according to his obituary) would drop in to visit when he was in Plymouth. Wilder died in 1931 shortly after his 60th wedding anniversary. Cady later himself became a dance caller and performed through the 1950's.

Back to Lady Washington's Reel