Back to Lady Westmoreland's Fancy[edit]

LADY WESTMORELAND'S FANCY. Irish, Air (6/8 time). F Major. Standard tuning (fiddle). AB. Francis O'Neill probably obtained the tune (as it is an exact copy) from a copy of the periodical The Citizen, or, Dublin Monthly Magazine, which printed the tune in 1841. However, the air may be older as alongside the tune in the Citizen is the note: "around 1789." The citation in the magazine reads:

Lady Westmoreland is said to have been a favourite in Ireland during the vice-royalty of her lord. This dance, bearing her name, was found in an Irish magazine for the year 1789. We know not whether it may not have been of elder date. We have seen a setting of it published in 1795, differing little from that which we give and called, oddly enough, "The Princess of Wales's Waltz."

If we take the date given in The Citizen at face value, then Lady Westmoreland would be Sarah Anne Child [1] (1764-1793), the only daughter and heiress of wealthy London banker Robert Child, who married against her father's wishes at Gretna Green in May, 1782. Charles G. Harper, in his book The Manchester and Glasgow Road: This Way to Gretna Green, Volume 2 (1907, p. 245) elaborates: 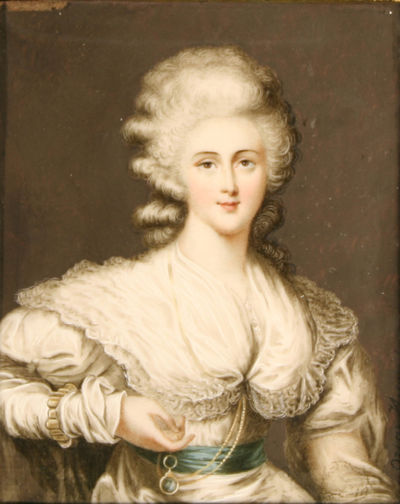 Sarah Anne Child, Countess of Westmorland in 1786 by Ozias Humphrey

[Robert] Elliot’s most romantic clients were the Earl of Westmoreland and Miss Child, who eloped in 1782. The father of the young lady was the famous London banker, whose great fortune, and the prospect of marrying it, dazzled the Earl quite as much as the beauty of his daughter and heiress. She fell in love with the noble suitor, whose proposal did not, however, commend itself to the banker. “Your blood, my lord, is good,” said he, “but money is better”; and he refused his consent. But the disappointed suitor was not disheartened, and the lovers eloped in a four-horse chaise; his canny lordship having arranged beforehand for relays of horses all the way: prudently, at the strategic point of Shap, hiring every horse to be found there. Mr. Child, enraged, lost no time in following. Using every effort that money could procure, he at last came up with the fugitives changing at High Hesket; and, leaping from his chaise, drew a pistol and shot one of the leaders of their conveyance. At the same moment, one of the Earl’s servants ran behind Mr. Child’s carriage and cut the leather braces suspending the body. The Earl and his love proceeded with three horses, with the father pursuing. Not for long, however, for presently the body fell over, and pursuit became a laggard and hopeless rearguard. One hundred guineas was the fee paid to the fortunate Elliot by the Earl. Mr. Child died within a year of the affair; it is supposed from disappointment and anger at his daughter’s disobedience. Rowlandson has, in his caricature, “Filial Affection,” drawn a more or less close commentary upon this incident. The banker took excellent care that neither of them should have his money, which he devised to any issue of the marriage. Lady Westmoreland died in 1793, leaving six chldren, and the Earl married again, at which one is instinctively revolted.

The elder daughter of Lord and Lady Westmoreland, Lady Sophia Fane, inherited the fortune, and married the Earl of Jersey; and their daughter, the Lady Adela Corisande Maud Villiers, followed the example set by her grandparents; eloping in 1845, at the age of seventeen, with the youthful Captain Ibbetson, of the 11th Hussars. It was a November night when the ardent pair flitted from the lady’s home in Middleton Park, Bicester. They did not patronise Elliot, but went to Gretna Hall. They reached Mr. Linton’s establishment on the 6th, and were duly married, as the surviving register shows. Lady Adela died fifteen years later, but Captain Ibbetson survived until 1898.

Back to Lady Westmoreland's Fancy[edit]