Back to Lambeth Wells

LAMBETH WELLS. English, Country Dance Air (cut time). G Minor. Standard tuning (fiddle). AABB. The melody was printed by Henry Playford in the Dancing Master Part Two (2nd edition) of 1698 [1]. It was retained in the long-running series through the 18th and final edition of 1728, then published in London by John Young, heir to the Playford publishing concern. The tune was also published by the Walshes, in The Compleat Country Dancing Master (London, 1718, and in subsequent editions of 1735 and 1754).

The name Lambeth is an Anglo-Saxon name derived from the word hythe and used for a place where lambs were shipped across a river; over time lamb hythe was reshaped by local tongues into Lambeth. During Playford's time Lambeth was an attractive destination for Londoners wishing to relax and sport in a convenient sojourn in the country, and when mineral wells were discovered there (reputed to have medicinal value) it enhanced the attraction and became quite fashionable (although never achieving the popularity of the nearby Spring Gardens--later Vauxhall Gardens, London's premier pleasure garden).

An announcement in the periodical London Gazette of April 1696, reads:

Lambeth Purging Waters in Langton Gardens, Lambeth Fields near the Three Coneys will be opened tomorrow. The place is extremely pleasant and fitted for the entertainment of persons of all qualities. On Tuesdays, Wednesdays and Fridays the music will be continued till 4 in the afternoon and the other days till 7. To prevent mistakes, on the top of the house which covers the Well is a Golden Ball. 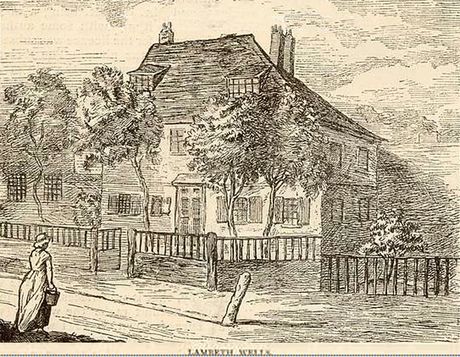 The caption reads "Lambeth Wells," although the depiction is said to be of the Green Gate public house located on nearby Grays Walk

'Three Coneys' (a coney is a rabbit) was a tavern bearing the sign and name Three Conies and Feathers.

By the mid-1730's Lambeth Wells was in decline, the fashion having gravitated to other mineral springs and resorts, it continued for another twenty years as a resort. However, around the year 1758 the it was condemned as a nuisance and a common brothel, and a dancing license refused. Lambeth Wells continued to operate as a tea garden and a tavern, and was used as a meeting place.

Back to Lambeth Wells