Back to Lament for Owen Roe O'Neill[edit]

LAMENT FOR OWEN ROE O'NEILL. AKA – "Uaill Cuma Eogan Ruaid Ua Niall." Irish, Slow Air (4/4 time). G Dorian. Standard tuning (fiddle). One part (Bunting, Clinton, Haverty): AB (O'Neill). Composed by Irish harper Turlough O'Carolan (1670–1738), or at least attributed to him by several authorities, including Hardiman (Irish Minstrelsy, London, 1831), Bunting (in General Collection of the Ancient Irish Music, Dublin, 1796), Clinton (Gems of Ireland, London, 1841) and Francis O'Neill (Waifs and Strays of Gaelic Melody), on stylistic terms. O'Sullivan (1958) records that (according to Mulloy MacDermott) O'Carolan composed the piece at the request of Charles O'Conor of Belanagare. Gratten Flood, however, in his History of Irish Music (Dublin, 1905), says that the Owen Roe's "glorious" lament was composed soon after his death, in 1649, predating O'Carolan's birth by a score of years. Owen Roe O'Neill (1582–1649), or, in Irish, Eoghan Rua Ó Neill, was a member of the noble O'Neill family of County Tyrone who as a youth left Ireland for military service on the Continent. He fought in Netherlands and distinguished himself as an officer in service with the Spanish, but in 1642 at the age of 60 he returned to Ireland and helped to mastermind the rebellion against the Stuart regime called the Confederation of Kilkenny. O'Neill won an important victory at Benburb in 1646, but died three years later of an illness at Cloughouter, County Cavan, just before he was to campaign against Oliver Cromwell's Roundheads. It has long been maintained in tradition that O'Neill was in fact poisoned at the hands of a woman who placed the toxin in his shoes before a banquet. O'Neill danced vigourously at the affair for several hours, causing the substance to be absorbed into his skin, leading to his death several days later. O'Sullivan says he was the only Irish leader able to cope with the Cromwellian invasion, and that his death was a national catastrophe.

The caoine, or lament, was obtained by collector George Petrie from the playing of fiddler Frank Keane (Co. Clare, then living in Dublin), who learned it from the singing of the women in Co. Clare but could not remember the words. Hoffman (1877) included a version of it under the title "Arranmore Tune (An)" (No. 115) in his collection of arrangements from Petrie's collection. The melody has become a fiddler's showpiece. 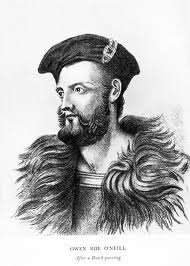 Back to Lament for Owen Roe O'Neill[edit]