Find traditional instrumental music
This is the stable version, checked on 21 June 2021.
Jump to: navigation, search

LANCERS QUADRILLES, FIRST FIGURE, THE. AKA - "Duval of Dublin's Second Set." AKA and see "Dorset (La)" English, Lancers' Set. The music is for the first of five figures in "The Lancers," a nineteenth century square dance which flourished alongside the quadrille in the last quarter of the century, and outlived it into the early 20th century. The name was derived from the "Quadrille des Lanciers" introduced in 1817 in Dublin by the dancing master John Duval. The dance has survived in Ireland in the form of "Lancers" set dances, of which several regional versions are known. A folk-processed Sligo setting of the original music for the first figure (Spagnoletti's "La Dorset") was recorded by the flute-and-fiddle duo of Tommy Healy and John Duffy as "The First Part of the Lancers" on their 1978 Topic LP Memories of Sligo.

The five figures of the full Lancers Quadrille were: "La Dorset" (music by Spagnoletti), "Lodoiska" (music by Rodolphe Kreutzer), "La Native" ("If The Heart of Man" from The Beggar's Opera), "Graces (5) (Les)" ("Pretty Maiden" from Storace's The Haunted Tower) and "Les Lanciers" (music by Janiewicz) - from Trim, quoting Groves Dictionary. 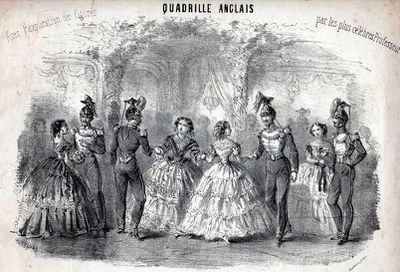 The Lancers Quadrilles by Spagnoletti, c. 1860

A dance called the "Lanciers Quadrille" was performed during the 150th anniversary celebration for the town of Lancaster, New Hampshire, in August, 1914, according to a playbill of the period; it was considered "old-fashioned" at that time. For another lancers set see "Trial By Jury" Lancers by Sir Arthur Sullivan.

Undoubtedly the most popular quadrille after the First Set is the Lancers-- indeed, we are almost inclined to fancy that it is the most popular of any quadrilles. Many years ago this dance was a great favourite, but, owing to the freaks of fashion, it lapsed into obscurity, and was seldom, if ever, danced. We believe praise is due to the Empress Eugenie, to whom we are indebted for many things beside crinoline, for the re-introduction of this best of quadrilles into the modern ballroom.

The Lancers are more intricate and complicated than the First Set, hence it behoves those who essay to perform them to be especially careful to be quite perfect in the figure-bearing in mind that a single mistake will frequently spoil the entire quadrille. But once having thoroughly mastered the figure, the dancer will never forget it, for we know of no tunes which so completely suggest the figure as the old-fashioned music of the Lancers, which we are glad to see keeps its place in the ball programme, despite several attempts to introduce a variety of questionable compositions under the guise of New Lancers.