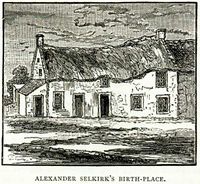 located behind them, and can clearly be seen from Edinburgh, across the Firth. The conical shaped hill, the remains of a volcanic plug, rises some 965 feet above sea level. Alexander Selkirk, whose adventures inspired Defoe's great Robinson Crusoe, came from Largo.

Largo Law has attracted many legends about hidden treasure or ancient gold mines. One tale is told of a shepherd, braver than his companions, who accosted a ghost who haunted the vicinity of Largo Law, to ask him why he roamed the land of the living. The shade was enticed to reveal where the shepherd might find the treasure that bound the ghost (for this might also release him from his wanderings), but under two conditions: the Auchendowie cock must not crow and the herder of Belmain must not blow his horn. The shepherd hastened to make sure the conditions were met, slaying all the cocks within earshot of the hill, and approaching the local herder, one Tommie Norrie, an by threats or cajoling, impugned him not to sound his horn. At the time appointed by the shade the shepherd drew near on the slopes of Largo Law, as the church bells tolled eight times. 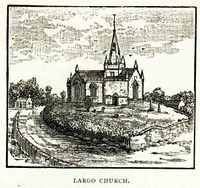 The shade turned to reveal its secret, but just as it was about to speak a horn blast sounded from down in the valley...Tommy Norrie had either betrayed his promise or forgotten his assignment. The shade, instead of divulging treasure, uttered a curse. "Woe to the man that blew that horn," it said "For out of that spot he shall never be borne." Indeed, Tommy Norrie dropped dead on the spot and his body remained immobile, despite attempts to remove it for proper burial. In the end the townspeople were forced to build a cairn around the body just where it lay.