Back to Lark's March (The)[edit]

LARK'S MARCH, THE. AKA and see "Bob Thompson's Favourite," "Coravat Jig (1)," "Geese in the Bog (2)," "Green Meadows (2)," "Humors of Limerick (2) (The)," "Jackson's Walk to Limerick," "Jackson's Trip to Limerick," "Jackson's Coola," "Lark in the Bog," "Mountain Lark (5) (The)," "Piper's Frolic (The)," "Tom Broderick's Jig," "Tuhy's Frolic," "Twice Tricked," "Wiseman's Favourite." Irish, Jig. D Major. Standard tuning (fiddle). AABBCCDDEE'. "The Lark's March" was Seamus Ennis's name for the melody, which also goes (along with other tunes) by the title of "Geese in the Bog." Ennis told a story about the tune to fiddler Caoimhin Mac Aoidh once during a visit in Galway. It seems that two pipers were in a competition, with the first piper to run out of tunes being the looser. Both musicians played through the night and as the sun was dawning both had played their entire repertoires, with the result that the one who played first had to concede, though only if the second could discharge one more tune. The second struggled to come up with just one more and was feigning thought to buy time when he spied a lark wading through the dewy grass looking for a morsel. It began its morning song, which inspired the piper to play an imitation, and with that he won the competition. Due to the fact that Seamus Ennis told a somewhat similar story for the tune "Gold Ring (The)," and recorded both tunes (along with the stories) on his Leader album, there has been some confusion resulting between the tune titles; thus "The Lark's March" is sometimes erroneously called "The Gold Ring."

The late flute player Mike Rafferty called a three-part version of the tune "Tom Broderick's Jig." More or less distantly, the "Saddle the Pony (8)" tune (one of many by that title) printed by R.M. Levey is related, as is P.W. Joyce's "Housemaid (1) (The)," "Butcher's March (2) (The)," and "Up Sligo." Fiddler Paddy Killoran recorded the tune in New York in the 78 RPM era as "Geese in the Bog (2)" (not to be confused with a more popular jig by that title). Uilleann piper, collector and researcher Seamus Ennis thought "Lark in the Morning (1)" was derived from "The Lark's March." 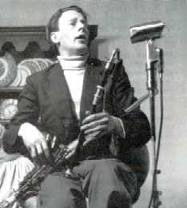 However the tunes are not the same; the parts of the tunes that are most congruent are the 3rd part of "The Lark's March" and the fourth part of "Lark in the Morning (1)."

Back to Lark's March (The)[edit]