LARK [2], THE. Scottish, Slow Air (6/8 time). C Major. Standard tuning (fiddle). AB. Composed by James Hogg [1] (b. 1770, in the Ettrick Valley in Selkirkshire), the 'Ettrick Shepherd' or 'Jamie the Poeter' (as he was known locally). Hogg inherited the poetic mantle of Robert Burns who was his idol, and was encouraged and aided in his art by Sir Walter Scott. His love of music was inherited from his mother who was a gifted singer and an authority on Scots ballads and legends. Hogg himself published a few collections of songs and ballads (notably Jacobite Relics of Scotland), and was, since the age of 14, also an accomplished fiddler. 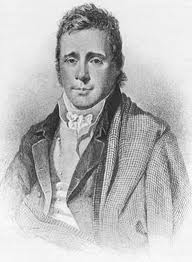 Bird of the Wildernes
Blythesome and cumberless
Sweet be thy matin o'er moorland and lea,
Emblem of happiness
Blessed is thy dwelling-place
Oh! to abide in the desert with thee.

Hogg was an excellent fiddler as well as a poet, and bought his first instrument at age 14.