Back to Larkin's Advance

LARKIN'S ADVANCE. AKA - "Keeper Hill March." Irish, March. G Major. Standard tuning. AA'BB'. Composed by Nenagh, County Tipperary, accordion player Paddy O'Brien [1] (1922-1991). The alternate title, "Keeper Hill," is the translation of the Irish Slieve Kimalta. Keeper Hill, near Nenagh, is the highest mountain in the Silvermines area of County Tipperary, and the most northerly and most westerly summit in the range. 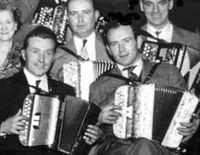 Back to Larkin's Advance