Lass of Livingstone (The)

Back to Lass of Livingstone (The)

LASS OF LIVINGSTONE, THE. AKA and see "Bonny Lass of Livingston (The)," "Cockleshells." Scottish, Scottish Measure. F Major (Gow, McGlashan, Playford): G Major (Geoghegan, Wright): D Dorian/Minor (Manson, Mount). Standard tuning (fiddle). AB (McGlashan, Wright): AAB (Gow): AABB (Geoghegan). "Lass of Livingstone" was a very popular air and dance tune that was included in a number of 18th century publications. As "The Lass of Leving-stone," it appears in London publisher Henry Playford's 1700 collection of Scottish dance tunes (A Collection of Original Scotch Tunes, full of Highland Humours [1], p. 14), followed by a printing in Daniel Wright's Aria di Camera (London, 1727). Bruce Olson finds the air was used for one of the songs in the ballad-opera The Highland Fair or Union of the Clans (1731), written by Joseph Mitchell and published in London by J. Watts. Later, the melody appears in the 1768 [James] Gillespie Manuscript of Perth.

There was a old song called "The (Bonny) Lass of Livingstone" with risque verses, rescued by poet Robert Burns and printed in his Merry Muses of Caledonia (1800), his collection of bawdy songs. The lyric he printed begins: 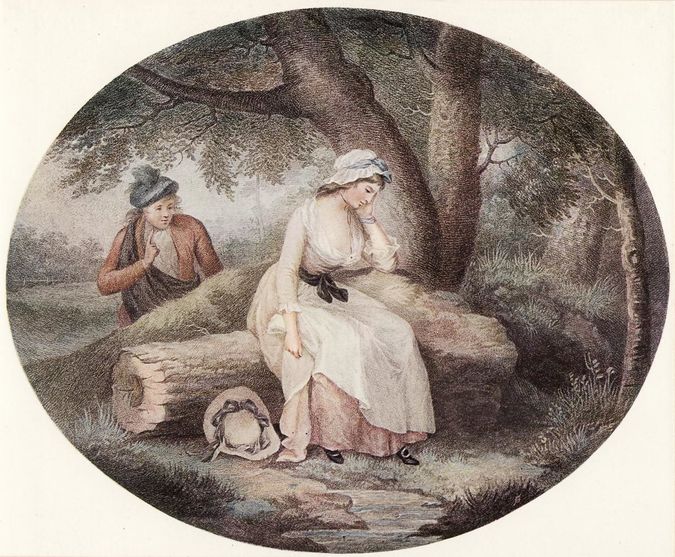 The Lass of Livingstone. Stipple engraving by T. Gaugain after George Moreland 1785

A more refined version was printed by poet Allan Ramsay as the indicated tune to "The Penitent", one of whis twelve Scots Songs (1720), and he also included it in his Tea-Table Miscellany, vol. i. (1724) this time with the title "Lass of Livingston" but without the music. The song was later reprinted in Johnson's Scots Musical Museum. Ramsay, however, called it an "ancient tune," and John Glen, who points out the Ramsay was born in 1684, believes the melody (perhaps with different titles) to have been from much earlier in the 17th century. A derivative setting as a reel can be found in Ayrshire fiddler-composer John Riddell's 1782 collection as "Countess of Percy."

In America, "Lass of Livingstone" is included, along with other Scots songs and dance melodies, in the music manuscripts of Setauket, Long Island, painter and fiddler William Sidney Mount [2] (1807-1868). Mount played a good amount of music for dancing and his own pleasure, and had access to both printed and local sources. The tune was in use in the United States some years before that, however, for it appears in a commonplace book of 54 square dance instructions from around the year 1795, probably from a New Hampshire enthusiast (New Hampshire Historical Society). The tune is actually given under the name "Revenge," with the "Lass of Livingstone" a secondary title.

See also the derivative Scottish tunes in the "High Caul Cap"/"Hielan Laddie (1)" tune family, and Playford's own "Cockleshells." As "New Hilland Laddie" the tune appears in the Blakie Manuscript of c. 1692, predating Playford's printing of "Lass of Livingston" by eight years. Gow (1817) directs the tune to be played "Slowly." "Lass of Livingston" was one of 50 Scottish songs composer Joseph Haydn set for publisher William Napier.

Back to Lass of Livingstone (The)