LAWRIES. AKA and see "McGlinchey's (3)," "Mrs. Lawrie," "Mrs Lawrie's." Irish, Reel. G Dorian. Standard tuning (fiddle). AA'BBCC. Composed by Armagh fiddler Brendan McGlinchey [1]. Named for a family in Birmingham, England, whose home was a center for music at the time McGlinchey was there. 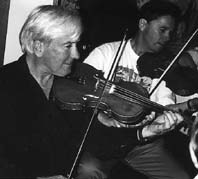