Find traditional instrumental music
This is the stable version, checked on 31 May 2020.
Jump to: navigation, search

Back to Lazy Farmer Boy (A)

LAZY FARMER BOY (A). AKA - "Boy Who Wouldn't Hoe Corn (The)," "Harm Link," "Lazy Young Man (The)," "Young Man Who Wouldn't Hoe Corn (The)." American, Song (2/4 time). D Major. Standard tuning (fiddle). One part. The song was recorded in New York in June, 1931, by Virginia banjo player Buster Carter and guitarist Preston Young (b. 1907), both singers. Fiddler Posey Rorer (late of Charlie Poole's North Carolina Ramblers) accompanied them as a side man, although on this cut Carter sat out, and it is only Rorer and Young playing (with vocal by Young). The group (who also went by the name "The Carolina Buddies") recorded ten sides but only a few were released; they evidently did not sell well for the group broke up by the end of the year. Young gave up music for the stability of regular work. The song, variants of which also go by the names "Young Man Who Wouldn't Hoe Corn (The)" and "Harm Link," tells of a young man who planted his corn too late, eventually losing his crop in a September frost. In addition, his inaction is the cause of his rejection in his courtship. The song begins: 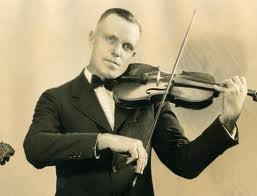 The songs origins are unclear, but it was in widespread circulation by at least the beginning of the 20th century [1]. Bluegrass versions include Alison Krauss & Union Station who recorded the song under the title "The Boy Who Wouldn't Hoe Corn," and Richard Green as "The Young Man Who Wouldn't Hoe Corn."

Back to Lazy Farmer Boy (A)