LEANBH SI, AN. AKA and see "Fairy Boy (The)." Irish, Slow Air (4/4 time). G Major. Standard tuning (fiddle). One part. Francis O'Neill printed the tune as "Fairy Boy (The)" in his Music of Ireland (1903). Irish poet and folklore collector Samuel Lover (1797-1868) set a song to this air, based on an older Irish song. This and similar songs tell of the folklore belief that when an child succumbed in infancy it was due to the fairies, who would substitute a sickly fairy child for a healthy baby. Lover's song begins: 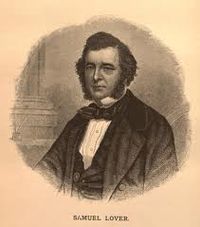 Samuel Lover, from John Boyle O'Reilly's The Poetry and Song of Ireland (1887)

A Mother came when Stars were paling,
Wailing round a lonely spring,
Thus she cried while tears were falling,
Calling on the Fairy king.
"Why with spells my child caressing,
Courting him with fairy joy,
Why destroy a Mother's blessing,
Wherefore steal my baby boy!"