Leap Over the Stone (A)

Back to Leap Over the Stone (A)[edit]

LEAP OVER THE STONE, A (Tros y Gareg). AKA - "Crossing the Stone," "Over the Stone." Welsh, Air (6/8 time). G Minor. Standard tuning (fiddle). AAB. A Welsh song from Edward Jones's [1] (also known as Baard y Brenin) Musical and Poetical Relicks of the Welsh Bards [2] (1784, issued in several editions), that relates the sentiments of a warrior returning home from battle and contemplating the home stone and imagining its store of memories of love and battle through the ages. According to "The Contemplator" website [3] the song has been attributed "to Rhys Bodychen, who led a troop of Welsh forces at the Battle of Bosworth Field where Richard III was defeated by Henry Tudor in 1485."

English lyrics, below, are by John Oxenford. 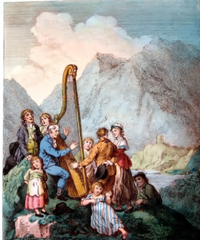 Over the stone, the old gray stone,
Let me ponder here alone;
Through all weather we go together,
Ancient stone, thou good old stone.
Of the many friends I've seen,
Thou the truest friend has been;
Some forget me, some have fled,
Some are false, and some are dead,
Changing never constant ever,
Still I find thee, dear old stone.

Back to Leap Over the Stone (A)[edit]