Find traditional instrumental music
This is the stable version, checked on 23 November 2021.
Jump to: navigation, search

Back to Leaving Lerwick Harbour

LEAVING LERWICK HARBOUR. Shetland, Slow Air (4/4 time). D Major. Standard tuning (fiddle). AA'BB'. A modern air in the Scottish style composed in 1970 by Lerwick, Shetland, fiddler William "Willie" Hunter [1] (1933-1994), on the occasion of his sister Lorna's emigrating from Shetland to New Zealand. It is considered to be the finest composition of a fiddler who was considered to be the best of his generation, of whom it was said he could move an audience to tears through his sensitive rendering of slow airs. 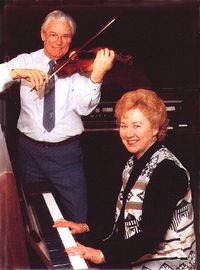 Back to Leaving Lerwick Harbour