Back to Leaving Lochboisdale

LEAVING LOCHBOISDALE. Scottish, Slow Air (6/8 time). B Minor. Standard tuning (fiddle). AABB'. Composed by Pipe Major John Wilson [1] (1906-1979), an Edinburgh piper who emigrated to Canada, and who was, through his teaching, an important modern influence on the latter country's competitive piping. The tune was composed on the occasion of leaving South Uist after competing in the Highland games at Askernish (the nearby Lochboisdale Hotel was a favorite place to stay with pipers attending the competition). 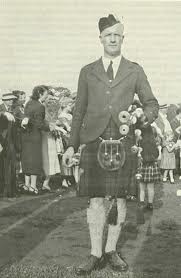 His life was not without hardship. In 1918 he lost most of his left thumb and joints on his index and middle fingers after handling a hand grenade he found on Arthur's Seat, Edinburgh, which forced him to adapt his playing. While serving with the 51st Highland Division in June, 1940, he was captured by the Germans at St. Valery, France, and spent the next five years interred in a prisoner of war camp.

Back to Leaving Lochboisdale