LEITH RACES. English, Jig. C Major. Standard tuning (fiddle). AABB. From Ann Winnington's music manuscript book (No. 22), c. 1810, apparently the sole source for the tune. The frontispiece to the MS indicates young Winnington resided in New York, although it appears she or her family may have been British, as there are indications they removed to England at a later date. The horse races at Leith (now in the docks district of Edinburgh) were held on Leith Sands at the edge of the site of the original golf links that had also been established in that open area. The following passage is from James Grant's Old and New Edinburgh, vol. 6 (1880's, p. 269): 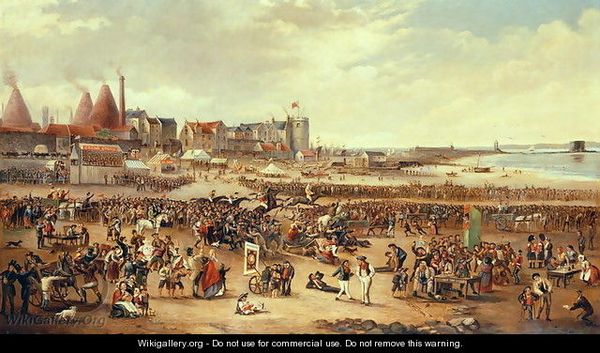 The Leith race week was a species of carnival to the citizens of Edinburgh, and in many instances caused a partial suspension of work and business. They were under the direct patronage of the magistrates of the city, and it was usual for one of the town officers, in his livery, to walk in procession every morning from the Council Chambers to Leith, bearing aloft on a pole or halberd, profusely decorated with ribbons and streamers, the "City Purse," accompanied by a file of the City Guard, with their bayonets fixed and in full uniform, accompanied by a drummer, beating that peculiar cadence on his drum which is believed to haved been the old "Scottish March."

This march would gather hundreds of attendant populace, who followed to the races; "gaun doon wi' the Purse."

The scene at Leith races, as described by those who have been present, was of a very striking description. Vast lines of tents and booths, covered with canvas or blankets, stretched along the level shore; recruiting-sergeants with their drummers beating, sailors ashore for a holiday, mechanics accompanied by their wives or sweethearts, servant girls, and most motley groups, were constantly passing in and out of the drinking places; the whole varied by shows, roley-poleys, hobby-horses, wheels-of-fortune, and many of those strange characters which were once familiar in the streets of Ediburgh, and of whom, "Jamie the Showman," a veteran of the Glengarry Fencibles, a native of the Canongate, who figures in "Home's Year Book," was perhaps the last. 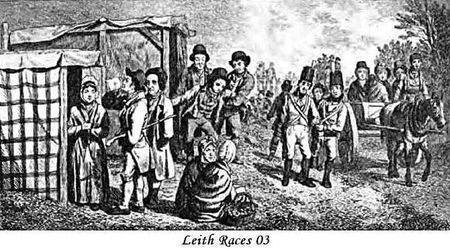 Saturday, which was the last day of the races, was the most joyous and outrageous of this seashore carnival. On that day was the "subscription" for the horses beated during the week, and these unfortunage nags contended for the negative honour of not being the worst on the course. Then, when night closed in, there was invariably a general brawl, a promiscuous free fight being maintained by the returning crowds along the entire length of Leith Walk.