Back to Leith Wynd

LEITH WYND. AKA and see "Come Hap Me with Thy Petticoat", "I'll Hap Ye in My Plaidie," "Munlochy Bridge." Scottish, English; Reel. England, Northumberland. D Major. Standard tuning (fiddle). AABBCCDDEEFF. Leith Wynd [1] was a steep narrow Edinburgh street which led to the city's port of Leith, running from the point where Low Calton bent round eastwards and became North Back of the Canongate, up to the Royal Mile, which it joined just below the Netherbow Port, opposite St Mary's Street. It was for many years one of the main routes into and out of Edinburgh, from and to the port of Leith. Reconstruction and infrastructure collapse, beginning around the 1840's, caused the Wynd to largely disappear, and the area was demolished to make way for Waverley Station. In the first half of the 19th century the way was bordered by tenements, and had long descended into decay. This passage is from a letter printed in The Scotsman in 1850: 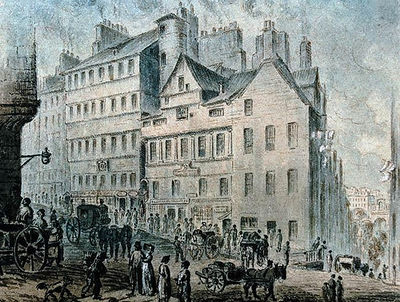 From a precipitous, narrow, and filthy close, you look up to the heights of huge mansions, honeycombed into the receptacles of a hundred inhabitants; and at a height which it makes the head giddy to look up to or to look down from, you see two or three heads of children projecting, or the filthy and squalid figures of their mothers, or of the other female inmates.

You ascend through dirt and darkness, stair after stair, every stair leading you in succession to a floor in which every miserable room contains a household, and where, by opening doors and barring up doors, and from the absence of sufficient light even in the day time, you hardly know when you turn yourself whether you are coming or going out of or going farther into the labyrinth. Into these places, parties in recent times have been dragged, forcibly stripped of their clothes, and flung out again; and innumerable crimes have been committed of which the world remains in ignorance.

The tune was set ("in a strong sea-shanty flavour," as David Johnson remarks) by William McGibbon (c. 1695-1756) and appears in his Scots Tunes; it is close to an earlier setting appearing in Adam Craig's A Collection of the Choicest Scots Tunes (1730, p. 16), but McGibbon improved the variations. Variation sets along with the melody are also to be found in Scottish amateur violinist and writing master David Young's MacFarlane Manuscript (c. 1740, No. 8). The title also appears in Henry Robson's list of popular Northumbrian song and dance tunes ("The Northern Minstrel's Budget"), which he published c. 1800, and in Allan Ramsay's ballad opera Gentle Shepherd of 1725. The melody was included by London musician Thomas Hammersley in his c. 1790 music manuscript collection.

Back to Leith Wynd