Back to Lemmie Brazil's No. 2

LEMMIE BRAZIL'S NO. 2. English; Schottische, Hornpipe (whole time). D Major. Standard tuning (fiddle). AABB. Learned from Gloucestershire traveller Lemmie (Lementina) Brazil (b. circa 1890) and her family [1]. There are a total of 16 known Lemmie Brazil (pronounced 'brazzle') tunes, all of which can be found in Charles Menteith and Paul Burgess's The Coleford Jig: Traditional Tunes from Goucestershire (2004) collection, where this tune is referred to as a 'Tap Dance'. Lemmie sang and played harmonica and melodeon. She was originally from Devonshire, but settled in Gloucestershire, but also had experience playing for step-dancing in Ireland. See the related "Bristol Hornpipe (The)" (whose first strain is similar to the second strain of 'Brazil's No. 2'). 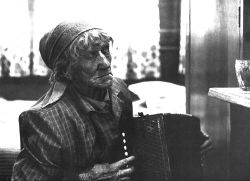 Back to Lemmie Brazil's No. 2