LEVANTINE'S BARREL. AKA - "Leavatine's Barrel," "Leventine's Barrel." AKA and see "Bummer's Reel (1)," "Galope du lac St-Charles," "Lancaster Reel," "Tullymore Piper (The)." Canadian, American; Reel. Canada; Quebec, Cape Breton, Prince Edward Island. D Major (Coles, Messer, Perlman, Silberberg, Songer): G Major (Miller & Perron). Standard tuning (fiddle). AB (Silberberg): AABB (most versions). The melody was named after an 1870's variety theatre entertainer named Levantine [1], whose act involved "foot juggling" a spinning barrel, and who billed himself as an "Equilibrist." According to vaudeville historian Joe Laurie, Levantine took a Maine native named F.F. Proctor as his partner after seeing the younger man work out in a New England YMCA. Proctor later toured in Europe, using the "Levantine" name, before turning to theatrical management, where he prospered as one of the founding fathers of "continuous vaudeville." With partner H. Jacobs, Proctor bought the Green Street Theater in Albany, renaming it Levantine’s Novelty Theater (it was later known as The Gayety). This was to be the first of many of Proctor's theaters, located across New England and New York, and into New York City. By 1888 Proctor was managing thirteen theaters, and at the height of his career he controlled 54 theaters around the country. When moving pictures began Proctor was one of the first to incorporate them into his venues, albeit as secondary attractions to vaudeville acts he booked. 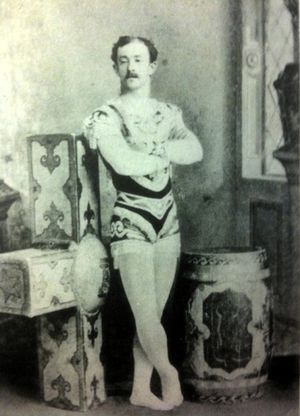