Back to Lewis Ricardo M.P.[edit]

John Lewis Ricardo [1] (1812-1862) married Lady Catherine Duff, sister of the 5th Earl of Fife in 1841. The Duff family is presumably the elderly Marshall's connection with young Ricardo, as Marshall composed several tunes for the Duff family. That same year he married Ricardo became Member of Parliament for Stoke-upon-Trent as a Liberal; a seat he retained until his death. He was instrumental in promoting the electric telegraph in Britain. 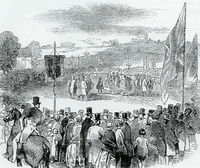 Back to Lewis Ricardo M.P.[edit]