Back to Libby Prison Quickstep[edit]

LIBBY PRISON QUICKSTEP. American, March (6/8 time). D Major. Standard tuning (fiddle). AABB'. The tune shares at least a first strain with "O Dear Mother My Toes are Sore (2)", "Jinny O Jinny My Toes are Sore," "Monongahela March," "Rustic Reel (1)," "Virginia Reel (3)," "First Western Change," "City Guards," and others. Libby Prison [1] was a notorious Civil War military prison in Richmond, Virginia, where captured Union Army soldiers were held, but it was not quite as infamous as the Confederate's Andersonville. It was located on the docks near the James River and prior to the war housed the merchant concerns of Capt. Luther Libby and his son George W. Libby. Some 1,000 prisoners were crowded into two floors of the warehouse structure, and overcrowding, disease, and poor nutrition took a large toll. 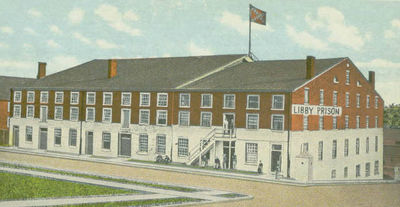 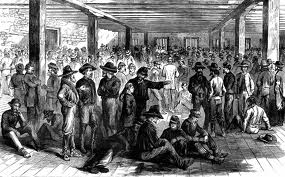 The interior of Libby Prison

Source for notated version: "Theo. B. Jobe, learned from a comrade while in Libby Prison in 1865" [Hopkins].

Back to Libby Prison Quickstep[edit]