Liberty Off the Corn Liquor Still

Back to Liberty Off the Corn Liquor Still[edit]

LIBERTY OFF THE CORN LIQUOR STILL. AKA- "Liberty (2)," "Old-Time Liberty." Old-Time, Breakdown. USA, Va. G Major. Standard tuning (fiddle). AABB. The title comes from the late 20th century Highwoods String Band who derived the tune from the "Liberty" on the Skillet Licker's recording "Corn Liquor Still in Georgia." On that recording, fiddler Clayton McMichen introduces the tune: "We`re gonna play the tune you all been askin` for, 'Liberty' - off the corn licker still", referring to their previous tune-and-skit comedy record "Corn Liquor Still in Georgia." The Skillet Lickers actually recorded fourteen sides of the running skit, between the years 1927 and 1930, which proved to be a very popular recording for the time. 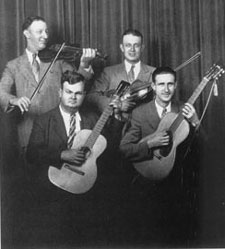 One iteration of the Skillet Lickers 'crew' of North Georgia musicians, whose lineup could vary greatly. A 1931 photo of Bert Layne, Riley Puckett, Clayton McMichen and Slim Bryant.

Back to Liberty Off the Corn Liquor Still[edit]